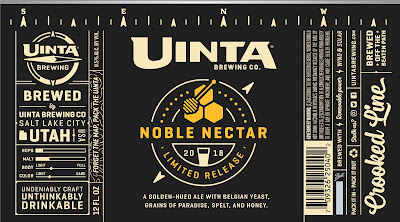 Here it is, your preview of new stuff coming soon to beer glass near you. This edition of New Brews Soon for You, touches on three very different beers from Uinta, Squatters and SaltFire.

Starting with Uinta's preview, we have Nobel Nectar (pictured above). This brand new beer looks to be a Belgian style golden strong ale at its base with the addition of grains of paradise, spelt and honey. The target ABV will be around 8.5% - look for it in 12 ounce cans when it hits the market.

Squatters Meteor Shower is in the fermenter as we speak! This is a small batch release of a New England Style IPA made with a shload of Galaxy Hops. Squatters had huge success with the session version of this beer, this 7.0% version will likly be a hit as well. This beer is likely to hit at Squatters downtown pub in the next fourteen days - in 16 ounce cans. Stay close for the exact date.

Saltfire's Saison De Trahison will be a rotating saison that will change with every batch. Hell, why

not? Brewers do it with IPAs and pale ales, why not saisons. This one is probably still a month or so away. The debut Saison De Trahison will feature lemon zest and ginger root and have an ABV of 6.3%. Saltfire is busy building up their stock of debut beers for an opening that is hopefully happening in the next couple of weeks. When they tell me, I'll tell you.

I have a feeling this will be a great summer for new local beers - what a great time to a craft beer lover in Utah.