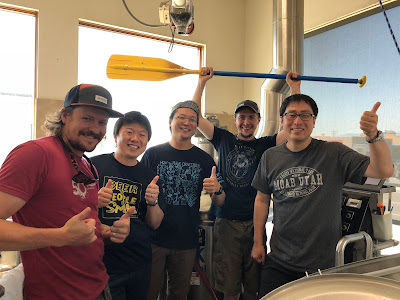 Did you know that Salt Lake City has a sister city in Japan? It’s true, our sister city is Matsumoto, Japan. For 60 years Salt Lake City and Matsumoto have been part of the Sister City Exchange, a program dedicated to promoting cultural exchanges, business and trade relationships along with community development. Matsumoto is roughly the same size as Salt Lake and shares many of the same geographic characteristics as well. It also has a kick ass brewery which leads us to today’s blog post. 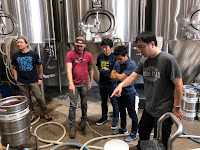 To celebrate the 60th anniversary of our two cities’ partnership, Epic Brewing Company and the Matsumoto Brewery have teamed up to brew a special brew to mark the occasion. Yesterday morning (7/23/28) Matsumoto Brewery Managing Director, Mr. Takahiro Fukuzawa, and Chief Brewer, Mr. Takumi Katsyuama Joined, Joined forces with Epic’s Jordan Schupbach, Director of Brewing Operations (and his brew team) to create a special beer that will be available both in the U.S. and Japan.

The collaboration beer that they brewed is a hop-forward double IPA inspired by Epic’s popular Hopulent but with a sweeter aromatic focus. The beer will highlight honey brought from Japan and 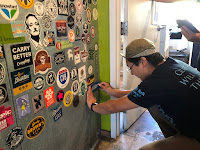 will possess Ekuanot, Motueka, and Mosaic hops. Epic will be utilizing some of the new techniques developed with their popular New England-Style IPA in a way that reflects current flavor trends in Japanese IPAs; a portion of the finished beer will be exported to Japan and highlighted at the Matsumoto Craft Beer Festival, September 14-17th.

The Japanese craft beer scene has been steadily gaining steam in recent years; Epic has been exporting their beers to Japan since 2012, so they’re already a known player in the region. Currently there are more than 200 craft breweries open nationwide and the Matsumoto Brewery has been leading the way in the Japan’s Nagano region. 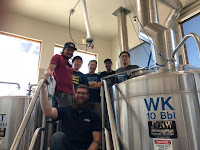 It was a pretty cool day for beer in Salt Lake yesterday and it looks like everyone in the brewhouse had a blast. As soon as the this special IPA is ready, I promise to give you the heads up on the where and when.

And on a an Epic side note; today is Pie and Beer Day (or Pioneer Day if you prefer)! Epic has also created a special beer that will only be avaiable for Pie and Beer Day and it goes on sale later today. This is the only beer that I know of that was created exclusively for Pie and Beer Day. Feel free to thank my wife Krin for spearheading the production of this beer. The beer is part of Epic's Oak and Orchard series. It's a sour ale aged in oak barrels with Blueberry and Boysenberry. It a phenomenal sour ale that's a Utah exclusive and can only be purchased at Epic's SLC brewery or at Beer Bar. If you're into sours, you know your going to need this.