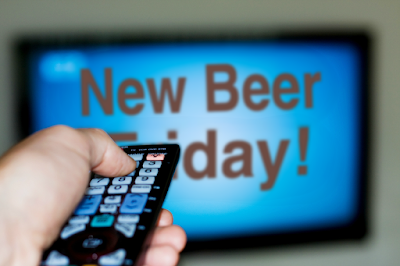 What a huge week! There were a lot of small batches that were produced for craft beer week that may not have made it through to the end of the week, something that you may have tried didn't make it this far. That stuff that did was quite enjoyable. Here are your New Beer Friday options along with Friday's updated Craft Beer Week calendar. Prost!

Shades - Peach Cobbler: The nose is tart with peach, vanilla and graham crackers. The taste starts a little tart then, Bam! It tastes like peach cobbler. The peach takes on more unripened flavors due to the tartness, otherwise it's spot on flavor-wise. Great Beer! 6.3%. Available at Shades and Beerhive

2 Row - All About Apricot: This apricot sour leaps right out with musty stone fruit and tropical fragrances and funky brett. Looking much like fruit juice, the beer begins by layering the tongue with sweet, succulent apricot with hints of honey and sourdough mixed within. As the sweetness dissolves, its the tang of the apricot that lead the way. Juicy and slightly jammy, the sour ale underneath breaks through with its tart flavors of dry, peppery white wine, gooseberry and lemon. The barrels apply ample oak with hints of cork, cellar funk and a smack of horse blanket towards the finish. This is wonderful stuff, and one of the most audacious beers to come out of 2 Row in a while. 11.2% - Available at 2 Row this Saturday, currently for sale at Craft by Proper, Bayou, Beer Bar

Epic - Chasing Ghosts: This beer a nice hazy appearance, along with a nice, fruity nose featuring grapefruit, lemon peel, pineapple, and mango. The taste opens with lots of sweetness: melon, mango, and a hint of caramel, along with grapefruit and fresh pineapple. Towards the end, creamy caramel malts round out the perceived fruitiness It finishes sticky with low bitterness. This ale is light and crisp with lively carbonation and it drinks well below its 10.3% ABV. If you're a fan of this style (most of you are), this will make you extremely happy. At Epic and Bayou.

Shades - Light Lager: Surprisingly flavorful for a light beer, and it's drinkably smooth without veering into blandness, and little to no bitterness whatsoever. Nothing amazingly special, but you know that when you see the word "light." The colder, the better. A good alternative to the macro brands. 4.0%. Available at Shades and Dick n Dixie's

Kiitos - Mango and Pink Guava Milkshake: This one is super fruity; you can tell that a lot of mango and guava went into this. the lactose addition adds a good amount of sweetness, making it very desert like. A little bitterness in the finish would help its drinkability. Overall a solid brew. 4.0% - Available at Kiitos.

UTOG Hefeweizen: This will be released later today at UTOG. Sorry, no notes. 4.0%.

Epic Brewing: The official debut of Epic's Chasing Ghosts, Double New England IPA. This is available at the brewery and there is also a release party for it at  the Bayou.
The Bayou will also be pouring Epic's newest session beer simply called "White". It's a Belgian style witbier made with camomile and spices. taps around 3:30pm.
A special release of Elder Brett #7 is also being offered in the brewery's bottleshop

Bohemian Brewing: BoHo is bringing back "Free Growler Friday”. No purchase necessary, swing by the brewery and pick up a free (empty) growler in honor of American Craft Beer Week.

Hopkins Brewing: Friday - Fish and Chips/ Brown Ale
Bring in a sticker from another brewery to add to their sticker post and get $2 off food. Limit one per customer.

UTOG Brewing: Debut of their Hefewiezen (later this afternoon).


Red Rock Brewing: $2 Beer of the Day. Each day will feature a different beer (decided the morning of).
Red Rock Instagram Contest. $25 gift cards will be given away every day on Red Rock's Instagram. Details on their Instagram.