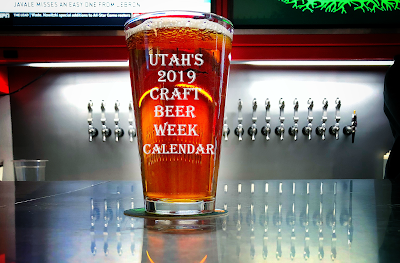 Today kicks off American Craft Beer Week in Utah. If you're new to craft beer or have never participated in this special week, you're in for quite the ride. Breweries from all over the state will be having special events and offering special deals on beers to help celebrate craft beers diversity. There's a lot going on and the list of daily events that I've spent the couple of weeks compiling is fluid to say the least. Please keep an eye out for Utah Beer's social media, as I will be updating these daily list  a few times a day. Monday (today) looks to have strong start. I hope to see you out and about and some of these great venues. Any questions please? throw them my way. Cheers!

Craft Beer Week on KUAA Radio: All this Week Join Host, Bad Brad Wheeler, Erika Palmer (and yours truly) as we pick the brains of Utah brewers for insights on the beers they make and state of Utah's beer industry. Today's schedule includes:
Talisman Brewing Co. from 12:45 - 2:00pm
SaltFire Brewing Co. from 2:00pm - 3:00pm
Bonneville Brewing Co. from 4:00 - 5:00pm
Other times TBD.
KUAA is at 99.9 FM or you can listen in here.

Epic Brewing: Join Epic at Slackwater Pub and Pizzeria for a unique "tap takeover" featuring all of the Big Bad Baptist Variants: Big Bad Baptist - Big Bad Baptista and Quadruple Big Bad along with a selection of Epic's draft offerings. All draft will be $3 and 5 ounce pours of the Baptists will be offered. 6-9 PM.

Bohemian Brewing: The release of "Wake and Bock". A limited batch of Coffee Bock available only at the brewery (Cherny Bock meets Coffee).

Hopkins Brewing: Daily beer and food pairing. Monday - Burger/Stout
Bring in a sticker from another brewery to add to their sticker post and get $2 off food. Limit one per customer.

Thanks for the rundown. Keep up the good work!