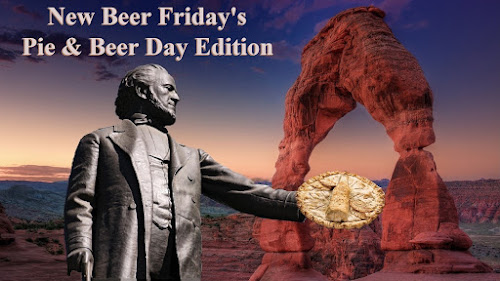 Pie and Beer Day, our favorite faux holiday is here! From a simple play on words and an unbridled desire to set our selves apart from the state's dominate culture; we as a beer community created this quaint celebration of beer and pie to fill the void on this very localized holiday. Though this year will see a greatly diminished Pie and Beer day scene, there will still be a few diehard places that will offer you special pie and beer menu options.


Fisher - Rotating IPA: Last week Fish went with the "Haze", this week it all about the West Coast style. This IPA has a deep ruby/amber color and has a nice aroma of range peel and pine. At first swig it come across as a big pale ale; the aggressive hopping schedule soon becomes apparent and the IPA reveals itself. Finishes semi-dry. Very nice. 7.1% - in crowlers at Fisher.
Uinta - Ataraxy IPA: This Unique - only for Utah, Hazy IPA is an exclusive small batch for Pie and Beer Day. This hazy has a huge citrusy aroma with some nice pineapple and tropical notes. The flavor is an explosive blast of grapefruit, mango and pineapple. The interesting part of this beer is the dankness towards the finish. It's not quite chewy but it definitely makes your head nod in agreement. This is a very limited and in 12 ounce cans only at Uinta. 7.0%


Shades - Boysenberry Pie Kveik: If your going to have your pie and beer in one glass, Shades is the perfect brewery to pull it off. Berry aroma with some cinnamon and vanilla. The flavor is all Boysenberry. The kveik yeast adds a nice tartness and it gives the vanilla something balance with. The graham cracker seals the deal creating the pie crust flavors. If your a fan of Shades' Kviek beer you'll love this. 6.5% - at Shades, Beerhive, Slackwater
Wasatch - Kellerbier Lime Lager: This has an unfiltered straw appearance with a nice aroma of Lime leaf and peel. The flavor starts briefly with crackery malts then transitions into that fresh leafy lime. This is a citrus forward beer that makes no apologies for what it is. quite refreshing. Available at all wasatch and Squatters locations. 5.5% I found mine at the UBC's Beer Store on 300 w.

Revision Mystic Topaz: Hazy apricot hue. The aroma has a grassy hoppiness with some orange pulp and  a blended sweet citrus punch.  The flavor yields to the sweetness of it all. There's no bitterness whatsoever then has a crushable orange pulp finish. Quite nice. 7.0% - Found at Slackwater
Prairie - Phantasmagoria: The aroma has a nice orange peel, mango, grapefruit and melon thing going on. Taste follows the nose, good balance and fairly nice bitter hoppy bite at the end. Another really tasty IPA. First IPA from Prairie that I'm aware of in the state. 8.0% - Found at Beerhive.

Epic - 2020 Oak and Orchard "Pie and Beer Day": This foudre aged boysenberry and blueberry sour ale is on it's third incarnation and is made especially for today.

Squatters - Bumper Crop: Squatters’ famous lavender and honey ale is back and it’s being paired with multiple pie selections at Squatters starting today. This is the first time at 5.0%.


Policy Kings Brewing is offering $7.50 Pie and beer pairing today from 3pm - 6pm or until the pie runs out.
Kiitos Brewing: Beer ice-cream float pairings. For sanitary reasons Kiitos will not be offering pie. However they will provide plates and utensils if you'd like to bring your own.
Mountain West's Garten: Peach cobbler and cupcakes from Sweet Vinyl Bakeshop to be paired with multiple craft beers from Utah along with Mountain West’s Hard Ciders.
Roosters: Half pizza and draft pints for $10.99 at Rooster 25th Street & Layton locations. I guess there's no pizza oven at the B Street Brewery.
Saltfire Brewing: Their patio is open and they are pairing Mobius Trip (peach and rum barrel) with peach cobbler from Sweet Vinyl BakeShop.
What did I miss? Please share!
Cheers.
Posted by Mikey at 5:51 AM

We will be releasing two barrel aged beers today.
We let Oat Slayer hibernate in barrels for five months.
One of the barrels previously contained port wine then bourbon and the other barrel aged Scotch, rum and bourbon.
Those will both be on tap and also available for crowlers to-go.

For those trying to keep up Chris Detrick is with Level Crossing Brewing in South Salt Lake! Cheers!