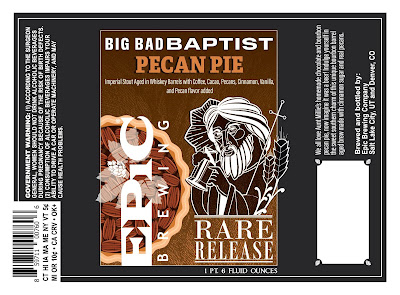 The following are previews of beers that will be coming to a local brewery near you. These are NOT currently available, but may be soon. I hope you find the info useful.

Beer Nerds from all over the world look forward to Epic's Big Bad Baptist Series every Autumn. It may not feel like BBB season yet, but it'll be here sooner than you think. Here's a preview of some of what you can expect from the 2020 line-up.

Pictured above is Big Bad Baptist Pecan Pie. I'm really looking forward to this one. I love pecan pie

and this seems like a dream pairing for me. Besides the pecans look for whiskey barrel aging, coffee cocoa, cinnamon and vanilla. ABV, TBD.

One of Epic more popular variants is the Big Bad Baptista. This year they've modified it and will produce the Bigger Badder Baptista. Not only will this spend time in whiskey barrels, it will also get to know some Mezcal barrels along with coffee, cocoa, cinnamon and vanilla. Should be an interesting flavor combo. ABV, TBD.

The following may be the longest BBB name ever. This is the Big Bad Baptist Double Chocolate, Double Peanut-Butter Cup version. This is an enhancement of last year's Peanut-Butter Cup Big Bad and will likely get a alcohol boost to go with the rest of the variant's flavors. Again, whiskey barrels with coffee, cacao and of course peanuts. ABV, TBD.

At a glance you might think that Epic is putting the "Sex" back into beer, but alas upon closer inspection it's just the Sextuplet Barrel. This is the BBB variant that barrel ages the shit out of everything that goes into the stout. This year you get six different barrel aged ingredients, including: the base imperial stout, the coffee beans, the cacao, barrel-aged coconut,  barrel-aged almonds, and even whisky barrel aged salt. Whew! any guesses what'll be in their barrel-age next year? It's ambitious to say the least. ABV, TBD.

And just because you've been good little beer nerds, I'm throwing in a bonus beer that has nothing to do with Big Bad Baptist stouts. After all of that heaviness I'm happy to preview one of Epic's newest IPAs called Put the IPA in the Coconut. I'm curious about this coconut IPA, I'm also curious about the hop bill - can't wait to see what they use. This one will have an ABV of 8.5%; it's pretty much a double IPA. I hear this one will be coming around sooner than later, FYI.


There ya go, that's the near future Epic line-up. More New Brews Soon for You will be coming in the coming days, including previews for T.F. Brewing Proper, Saltfire and more.

Cheers!
Images found at Shipcomplient.com/
Posted by Mikey at 5:28 AM

Now let me get this straight....