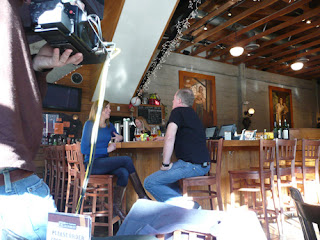 Believe it or not there are a few good television programs out there devoted to the art of beverage concoction. Off the top of my head; there's Three Sheets on Mojo, The Thirsty Traveler on The Fine Living Network and the cancelled Beer Nuts, Also on Mojo. These are all great programs and I recommend you check them out. Especially Three Sheets. (only available in HD) Zane Lamprey is riot. With the exception of Beer Nuts(only available in HD) there isn't really anything out there devoted to solely to beer. Beer Nuts Had the makings of a good show but didn't have the range of topics to make it watchable on a regular basis.

Now comes word Utah's Own Jennifer Talley of Squatter's Pub Brewery is shooting a pilot for a new program that reportedly is devoted to beer. She was apparently recruited by producer Peter Holmes who saw Talley in a video she did for her brewery and thought she’d be a good host, making the show about brewers, brewing and pairings. Things Jenny is eminently qualified to discuss. The Food Network or similar cable channel would be the likely home for a show like this.

Info provided from The Brookston Beer Bulletin has Jenny interviewing Shaun O’Sullivan at his 21st Amendment Brewery & Restaurant. Then O’Sullivan and Talley visited Magnolia and sat down to talk with owner Dave McLean over some food and beer. Then on Tuesday they filmed at Russian River Brewing in Santa Rosa. They filmed at both the new production brewery nearby and at the brewpub. Later Bruce Paton, the beer chef, cooked some food and he sat down with Talley and Russian River owners Vinnie and Natalie Cilurzo to talk about the pairings while they enjoyed both the food and beer.

I hope this bird flies, it would be great to have a program out there devoted to beer by people who know and love it.

As I mentioned in earlier post I'm a Videographer by trade. Coincidentally I did a two-part feature on Jenny in '04 along With my colleague Sandy Riesgraf. The Story was called The Queen of Beers. And, if I can toot my own horn; we won the Beer Journalism Award for it at the '05 Great American Beer Festival. I'm not saying, that why got you the job Jenny, But... Your welcome. All kidding aside, Good luck with this project Jenny. Salt Lake has your back. Thanks to Jay Brooks from Brookston Beer Bulletin for the photo and the legwork.

Here is The Queen of Beers.