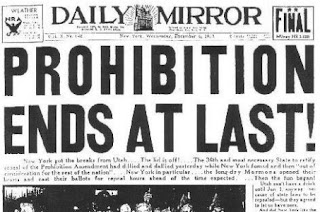 If you have an uncontrollable urge to have a sip of one of your favorite adult beverages today(12/5) there's a very good reason. Today in 1933 the United States of America breathed a collective sigh of relief as Utah became the 36th state to ratify the 21st Amendment to the U.S. Constitution, nullifying the 18th amendment. The ink was hardly dry on Utah's vote before President Franklin Roosevelt issued an official repeal and tossed-back the first legal beer in years.
Prohibition of liquor proved to be a massive failure both socially, legally and economically. By the by the end liquor law enforcement was virtually non excitement or payed to look the other way. In 1923 Utah's attorney general claimed that drinking in the larger cities was just as popular as it was before prohibition. Huge profits from the manufacture and sale of liquor made it impossible to stop.

Problems of enforcement and the unpopularity of prohibition led to cries for its repeal. Following his 1932 election, President Franklin D. Roosevelt kept his campaign pledge and each state soon began voting on the issue in special conventions. Despite the Mormon church's efforts, Utahns voted on November 7, 1933, for repeal of national prohibition and in the same election also repealed the state's liquor law. Utah was the thirty-sixth state to vote for repeal and thus, ironically, delivered prohibition its death blow.
Legal liquor began flowing again in Utah in 1935 when the first state liquor stores in Salt Lake City and Ogden opened their doors. Business was brisk at the new stores as Utahns eagerly bought-up the once forbidden libations; in the first fifteen days of operation receipts totaled $54,866.

So, thank Utah... er... or maybe Utah should be thanking the rest of the U.S. For if we hadn't the entire United States may have collectively come together to beat the holy shit out of us. So, your welcome! I think.
Posted by Mikey at 6:08 AM

Okay, but how can I send beer to a Utah friend?

Send them just as you would any other parcel. Odds are it will make it pass the invisible Booze forcefield that surrounds the state. Just be aware there's always the possibly that the recipient may have it confiscated in transit. But like I said it's unlikely.