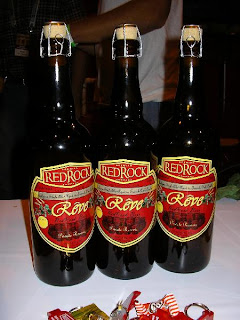 One of the best beers to come out of Utah in years(from in fact the west) is here and you'd better snag one now because it's in very limited production. Since 2003 the crew at RedRock have been experimenting with recipes to come up with the perfect Barrel-aged, Belgian-style tripple. It's been a long hit-and-miss process. Over the past four years we've gotten a chance to sample various stages of the development of this brew from local area beer festivals. At one time; I believe it was aged in a Bourbon barrel and the result was, well.... unique. Well never fear, experimentation and diligence has paid off with a spectacular interpretation on a centuries old classic.

This has been RedRocks' year. Garnering awards left and right, it's seems they can do no wrong. And it looks like they've saved the best of '07 for last. So for the Sixth Beer of Xmas, I highly recommend Red Rock's Rêve.

Poured into a Chimay goblet a light golden honey color with with a moderate fluffy white head that dissipated to a very thin froth. The nose is a little boozy with banana, cloves malt and ripe mango. The taste is very much the same starting with candied sugar and cloves that transitions into toasted malt and banana. The end is sweet and oaky. The alcohol is warming and welcomed, masked well by Rêve's full body. It adds a whole new dimension to the beer You really get a good sense of the oak in the finish. It's barrel aged for one year. Don't get me wrong it's got a kick. It's 10.2% abv is more than enough to warm your inner beer geek.

RedRock Rêve is more proof that that Utah beers are much more than just 4.0% anomalies . Earning the bronze medal at the '06 Great American Beer Festival and the silver medal in '07, Kevin Templin and his team are proving big things can come in small packages.

RedRock Rêve is available in limited quantities at RedRock's SLC location and it's Park City Pub as well as The Bayou and Fiddler's Elbow! The special edition trippel is available in a commemorative 750mL corked bottles, so snatch 'em up while you can. Cheers!
Posted by Mikey at 11:11 AM