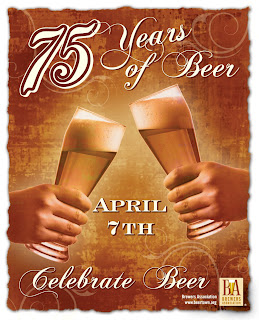 Officially, Prohibition ended on December 5, 1933, with the ratification of the 21st Amendment. But earlier that year, newly-elected President Franklin D. Roosevelt took steps to fulfill his campaign promise to end the national ban on alcohol. Thus on April 7, 1933 Roosevelt himself received newly legalized beer at the White House to toast what was the beginning of the end for Prohibition. In the 24-hours that followed, more than 1.5 million gallons of beer flowed as Americans celebrated.
To commemorate this 'oh so happy day', Squatters Pub Brewery in downtown Salt Lake City and Squatters Roadhouse Grill in Park City will celebrate 75 years of beer- flowing legally since the drought of Prohibition. The date will be marked with a specially brewed commemorative beer: Prohibition Pale Ale, brewery tours and 75¢ pints all day!
Jenny told me me that Prohibition is the first real Pale Ale that they've done in a very long time time. Of course, Full Suspension Pale Ale has been a staple at the the brew pub and in markets for years, but it's uber-hopped profile takes it slightly out the "traditional" category.
So, get in, sample a new brew and chat it up with Jenny & Jason.
Here's to beer lovers everywhere, lift a glass and toast to beer -- our legal privilege.
Posted by Mikey at 4:31 AM

Yeah, much hoppier than I thought it would be.