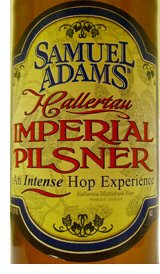 The Boston Brewing Company makers of Sam Adams Beer is a bit of an anomaly on the American beer scene. They're not quite a macro brewer, but there not a 'little guy' anymore either. Some trends in the beer industry seem to suggest that when a breweries production volume increase to certain levels, their ability to produce certain styles become hindered, because it isn't cost effective to produce some styles, and keep the cost to consumers down.

Arguably, This may or may-not be happening at Sam Adams. I would say not. Especially after trying Samuel Adams: Hallertau Imperial Pilsner. I have to admit I kind of scoffed at it when friends suggested that I give it a try. I was very happy to be wrong. This beer is a full-on sensory assault(in a good way)!

Poured a hazy golden-bronze color with a huge two-fingers of meringue head. The nose is a complex mesh of spicy, floral, citric, and resiny pine from the obvious generous doses of Hallertau hops.

Despite the sweet nasal assault the taste starts smooth and almost creamy with just the right amount of bitter hoppy 'bite'. At first sip it seemed to be all Hallertau, but the more I got into it the malt sweetness became more pronounced and balanced out nicely.

The finish is equally pleasant with a mild floral dryness that gradually blankets the malty sweetness. The malts are accentuated by a slight alcohol warmth. Really bold and hoppy, more like an IPA. Just incredible. One of the great accomplishments of this beers is it's ability to bring you full circle, from the nose to the back of your tongue. It tastes exactly like the first whiff.

I wasn't expecting the Dogfish Head-esque crazy bitterness even though the label claims "reckless" hops. It's far from one dimensional.

I was very impressed with the Hallertau Imperial Pilsner.

It's funny you mentioned DFH, because their Golden Era Imperial Pilsner is way less hoppy than the Sam Adams version.

My mouth is starting to water thinking about that Sam Adams Hallertau Imperial Pilsner.

Wow, that sounds really good! I'll have to try it!

Yes, it was really nice. Thanks for suggesting it. Sam Adams might be a macro in terms of production, but generally they still produce really good beer.

Hey Doug, just curious. Where did you purchase it?

Anonymous said...
This comment has been removed by a blog administrator.
3:29 AM

The Bayou of course!