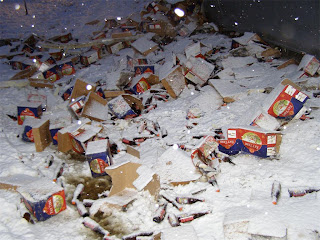 The Universe has a way of exacting a price on those who would try to do wrong unto others, or to inflict retribution for those who motives may be less than pure. Well yesterday Karma saw a wrong and moved to rectify it.

Many in Utah would love to be customers of The New Belgium Brewery located in Fort Collins, Co. But for some petty, "head scratching" reason, the trendy brewery won't sell it's suds to one of it's closest-large markets. The reason? well the state warehouse that stores the beer is kept at room temperature; and apparently New Belgium's beer is far too fragile to be kept at room Temperature for a few weeks. Thus no NB beer here.

As I mentioned, yesterday Karma came a knocking. A heavy weather system moved through Northern Utah dumping two feet of snow in some areas. A truck carrying it's cargo for destinations unknown (well I know it wasn't stopping here) lost control in the snowy conditions and lost it's 40 thousand pounds of Fat Tire Amber Ale all over I-84 east of the city of Morgan.

When Karma called me yesterday to tell me what it had done, it said "you'll use their roads but won't sell them your beer? FOR SHAME"! thus Karma's price was wrot.

Personally I could care less. New Belgium (in my opinion) isn't at the level it once was. And though Fat Tire has a huge following, it's an average beer at best. So there you are, the Beer Gods have spoken. Cheers!
Posted by Mikey at 5:30 AM

So vitriolic and bitter are we, Mikey? That's not the usual Mikey attitude toward purveyors of fine craft ale. I'll agree with you that Fat Tire is a boring, mediocre beer. In fact, the NB staff feel the same way and have admitted it to me personally. They also realize that they sell a shit-ton of Fat Tire and those sales finance their ability to brew the less lucrative but more interesting beers, and do it in a socially and environmentally responsible way.
I dare you to tell me their Abbey Ale isn't fantastic. The 1554 Belgian black ale is a unique and delicious beer. The La Folie can take credit for introducing much of the American Beer-geekery to the appeal of wood-aged beers. And that bottle of Abbey Grand Cru I have tucked away? Well, I haven't tasted it yet, but I have high expectations based on my already high opinion of New Belgium.
Also, I would like to thank New Belgium for donating their yeast strains to Jenny Talley. That perfect, peachy light effervescent flavor of the Fifth Element originated in the New Belgium barrel room...
I do not blame the brewery for wanting their unpasteurized beers to be given the best storage conditions. A retailer can't afford to let their products' reputations suffer due to an avoidable and improper retail method. Personally, I have stored NB beers for long periods of time without any noticeable spoilage, but I certain understand why they don't distribute through Utah's archaic system.
I will cry for the lost brews. May more thoughtfully-crafted suds find their way to Mikey and my gullets and fewer to such an unfitting demise.

Andy, I think we're all aware that shipping and storing beer at a temperature above "rocky mountain ice cold" is not enough to cause noticeable spoilage. That's kind of the reason beer became popular in the first place, isn't it? Water goes bad faster.

I would go so far as to say that beer is better off in a cool, dry warehouse than than under the bright fluorescent lights of a lot of retail display coolers. Hard to imagine that the folks at New Belgium don't understand this.

I agree with you both: New Belgium does make some really nice beers like the La Folie and the Lips of Faith stuff. However, I seriously doubt that a few weeks in a room temperature (or colder) will affect the beer in any way. Sunlight may be another issue, but the warehouse should be fine. If it's good enough for Rochefort...

I have to lean towards Andy's position on this. While a necessity for ice cold storage does not exist, I think one is probably better off storing cold.
Back when I lived in St. Louis I used to drink Fat Tire weekly when I went to the pool hall (only thing approaching decent beer on tap). And the quality of the beer was very variable. Sometimes it tasted flat out spoiled, sometimes it tasted very nice. I chalk this up to questionable beer handling on the part of the establishment. When I recently flew through CO and had a chance to drink some Fat Tire, it was actually quite delicious. While I'm not 100% sure of the reason, I think this is because it was handled better and served more quickly. So I would say handling, part of which is storage temperature, is partly an issue.
There's also the case of my homebrew. I can definitely store my homebrew longer with less impact on flavor/aroma characteristics if I do so cold rather than warm. I've noticed the difference myself. Obviously there are some differences between bottle-conditioned homebrew and force carbonated commercial brew, but I think it points out that temperature has a role to play.
Now whether or not the beer is stored long enough by the state to cause problems, I don't know. But it may be an issue.
As to Rochefort, I will say this: I've yet to have a Rochefort in the state of Utah that is as good as ones I had in St. Louis (though I think that's more likely a "bad batch" issue than a storage issue.)
(Sorry for the essay)

This article agrees that temperature fluctuations don't affect the beer much. I'm not an expert, but it seems to me that beer problems like oxidation, infection, ect. are unrelated to temperature.

The thing is, I agree with that article. But I don't know if he talks to the point I was trying to make about long storage at room vs. cold temperatures. I definitely don't think something like allowing a beer to reach room temperature after being cold is itself going to screw up the flavor. And I've known for a long time that it won't skunk a beer.

Like I said, in my experience, storing long term (months) in warmer temps is worse than storing cold. Oxidation, skunking, and infection are, like you said, unrelated issues.

Personally I think NB are taking this thing a little too far. But then again, the DABC/Utah law is even more ridiculous with respect to temperature/storage regulations.

I blame Utah. I find it understandable that NB wants their product to reach my lips in the best possible condition. A pox on Utah beer legislation and liquor monopoly.

I don't understand. NB beers are kept at room temperature at many stores in Colorado. I pick those warm cases rather than the cold ones when I bring them back here to keep them from going warm, cold, warm, cold.

Yeah, Andy is right the bottom line is that we need NB beers here. Imagine drinking a La Folie in the Bayou. Pure heaven. The problem with a state monopoly on high ABV beers-no competition. Yet, 7/11 can sell all the Bud they want. WTF? (Of course, the monopoly has been broken in the sense that breweries can sell beer).

Hook me up. That means you Andy:)

I had no idea that this little yarn on beer spillage would inspire such well thought-out debate. For the record, I don't hate NB products. It's just that this "elitist embargo" their running here really chaps my ass. I get it that beer is better fresh. I get it that it's better to refrigerate than to store at room temps. The beer selection at liquor stores in Utah is not like it is in states like Colorado where you'll have hundreds of labels available at any given beer outlet. The craft beer in Utah moves of the shelves fast. Mark Alston will blow through two pallets Rogue in as many weeks. And that's at a huge mark-up from what you pay for the same thing at the liquor stores. I believe in refrigerating beer but as fast as it moves in Utah, I think the point is moot. Keep the essays coming boys, you all get A's!

sorry mikey but I think this is tacky and stupid to settle the debate YES THE DABC FUCKS THE BEER UP BECAUSE THE WAY THEY HANDEL IT. all I see on the freeway is a lot of heard work.