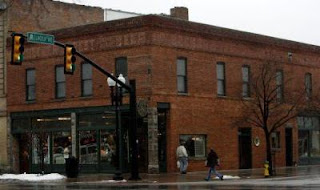 The controversy over Bruce Edwards' battle to restore a hundred year old sign on the historic C.C.Keller Building on 25th Street in downtown Ogden has come to an end, a full 10 years after his original request.
Mr. Edwards had been battling the cities Landmarks Commission until the American Civil Liberties Union stepped in and took the city to court. where, in 2005, 2nd District Judge Parley Baldwin ruled in favor of Edwards, saying Ogden had usurped his First Amendment rights.
The original wording, dating back to about 1910 and painted on the north side of the two-story brick structure, is still barely visible: "Every hour upon the hour for about an hour Drink Becker's Beer - Ogden's Famous Beer."
The turn-of-the-century brick structure at the corner of 25th Street and Lincoln Avenue housed the infamous El Borrocho saloon from the late 1930s to the mid-1970s. The bar was known for its tough characters and frequent murders.
Also, until the mid-1950s, the building was home to the brothel known as "The Rose Rooms," named for proprietor Rose Davies. A sign outside the building advertised "Furnished Rooms" as code for the enterprise.
Utah has a very vivid beer history. If your interested in getting the full story on Utah's beer history check out "Beer in the Beehive" by Del Vance. Cheers!
Posted by Mikey at 8:46 AM

This made me very happy. :)

Beckers Beer needs a come back for Utah.

FYI: Beckers and the buildings on H25 are for lease/sale by contacting Kent, Advantage Real Estate G. Norman George, Ogden, 801-644-0903 or BeckerBeer@aol.com

Yeah they might be for sale but the idiot that owns them is a real piece of work. Please do your self a favor and don't get involved in anything that Bruce Edwards owns, lives next to or is even on the same block. The time and you will loose & the bull crap you will have to put up with is not worth the reward...trust me.