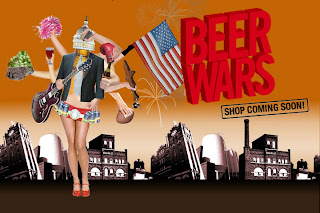 2008 was a big year T.V. documentaries on beer. I think there were probably four or five Docs produced by various cables channels, praising the craft brewing and the history of beer in general. Well there's a new documentary coming. This one to debut in theaters.

Beer Wars is set in the classic David and Goliath story about Sam & Wanda two small, independent brewers who are shunning the status quo while battling the might and tactics of Corporate America.
Told from an insider’s perspective, the film goes behind the scenes of the daily battles and all out wars that dominate one of America’s favorite industries.
Click on the poster or the title for a link to the trailer. Cheers!
Posted by Mikey at 6:23 AM