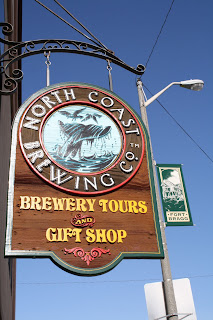 Yeah more new beers! New to area liquor stores is what looks to be quite a nice line-up from North Coast brewing out of Fort Bragg, Ca.
North Coast Brewing has entered the market with their Blue Star Wheat Beer, Old Rasputin Russian Imperial Stout, PranQster Belgian Style Golden Ale, Brother Thelonious Belgian Style Abbey Ale and ACME Pale Ale. Quite a diverse line-up eh?
Also on the radar is LEINENKUGEL'S Berry Wiess, GRIESKIRCHNER WEIZEN, SAMUEL ADAMS CHERRY WHEAT & FULL SAIL RESERVE 21 DOPPELBOCK.
March is looking like a great month to get your beer-on. Who knows, if the Gods are nice we could see these on tap sometime. Cheers!
Posted by Mikey at 5:37 AM

Where at? State store or only the bayou? Dude, Old Rasputin in Utah! Hell yes!

I think you got so giddy at the news Old Rasputin you forgot to read the second line of the post. Liquor Stores!

Any idea when these will show up?

They should be out now.

If anyone finds these beers in a specific store let me know. Thanks.

Well, they are NOT at the 300 E Wine Store, at least not as of today March 6th. Anybody else? And are they gonna bring in Old Stock or the Red Seal? I could drink the Red Seal until the cows come home. If we could get the whole North Coast lineup that would be awesome. Way more exciting than Stone or New Belgium :)

I checked the same store... If anyone is interested, they do now have Full Sail's Bourbon Imperial Stout, and Sierra-Nevada's Bigfoot 2009 and ESB.

Just got off the phone with the DABC. They told me I can find NC at the Foothill store, Ogden store, North Temple Store, Murray Kentucky Ave. Store, and Draper Minuteman Drive store.

Found the Acme Pale at the 3rd East store today.

I will have to check, but I hope they are bringing la merle...besides ol' raspy...

I haven't been able to find Old Rasputin at any Utah State Liqueur store. And I've been looking for years.

Ask someone at one of the liquor stores if they could do a "store search" for you. If there's any around they can tell you which stores have them.