Could "Alcops" Be Returning to Utah Store Shelves? 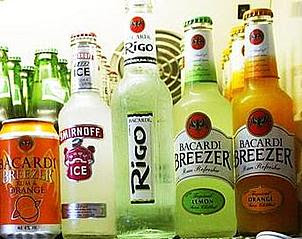 I don't know why I keep coming back to this subject. I guess at a fundamental level I find it draconian. Whereas you establish a set of laws then then alter them on a technicality so that they fit an individual or group agenda.

I refer to so called "alcopops". As you'll recall last summer state officials lead by Attorney General Mark Shurtleff began a state-wide cracked down on sweet and fizzy, intoxicating drinks such as Mike's Hard Lemonade that -- save for their alcohol content -- bear a remarkable resemblance to soda pop.

The sugary beverages had long been taxed as flavored beers. But state authorities reclassified them as liquor, raising the taxes on a six-pack thus moving them to state liquor stores even though they contained the state required 4.0% alcohol by volume.

The state of Utah's reasoning was this; because the the beverages in question contained flavoring extracts that were made with distilled spirits, they were in fact themselves spirituous in nature even though the beverages themselves derive their alcohol by mean of fermentation. Such as beer.

In California a similar law was passed. Substance abuse foes and lawmakers passed a law making "alcopops" liquor as well, and thus subject to higher taxes. Since the new tax rate kicked in Oct. 1. California has only collected about $9,000 in taxes, That's nothing in state of it's size and population.

Beverage makers admit they aren't paying the new taxes. They say they don't have to because they have reformulated the drinks -- more than 6,000 varieties -- to transform them into simple beers by limiting the amount of distilled spirits they contain.

They won't explain how. The formulas, they say, are trade secrets. And beverage-industry officials and federal regulators say there are no tests to determine how much distilled spirits the drinks contain versus those acquired by fermentation.

Now, I don't pretend to know the exact Utah law on these beverages, but it seems to me that if the formulation of the beverages are changed, eliminating the need for flavoring extracts these beers would revert back to being simple beers. Thus making them available to be purchased at grocery and convenience stores under Utah law.

And just to reiterate, I don't drink these beverages. In my opinion, the way the state of Utah went about abolishing them was pretty slimy and made convoluted liquor laws even more murky.

If anyone has a better grasp of this law please offer it up. Cheers!
Posted by Mikey at 4:20 AM

I'm sorry that this is self-promoting, but I think you will laugh at this picture: http://www.poorpenmanship.com/2008/10/my-cat-rejects-our-last-convenient.html

We bought a six pack of these a while back 'cause we were throwin' a party and a friend was coming over who only drank that stuff. Unfortunately, she didn't drink them all.

So for about a month I lamented over what to do with them. Luckily another friend threw a party. We took them to her house, dropped them in a cooler with a bunch of other beverages, and ran.

Don't know what happened to them after that. All I know is that my hands were clean.