The Smokestack Series Comes to Utah 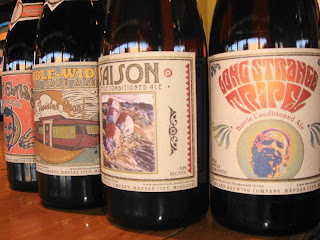 Last November Boulevard Brewing out of Kansas City, Missouri entered the Utah market with two of it's staples, their Unfiltered Wheat and their Lunar an American version of a Dunkel Weizen.

Now comes word that Boulevard's Smokestack Series is now on it's way.

The Bayou plans to introduce these ales to beer lovers in the coming months. The beers
are packaged in 750 ml champagne bottles with cork-and-cage closures. No word yet on the pricing. Cheers!
Posted by Mikey at 4:20 AM

Wow. Now this sounds awesome. Are we looking at a Bayou only release here? Great news.

Initialy they will be exclusive to the Bayou. If they sell well, and they will. The state may pick them up.

BTW, has anyone seen any of the North Coast stuff yet besides the Pale Ale? Bayou?

NO. But the DABC changed it's listing from "general" to "Limited" distribution. So we'll just have to keep our eyes open.

But a 'L' listing should still be in some stores, like the Wine Store and Park City. Why would one come out, but the others stay in the Warehouse?