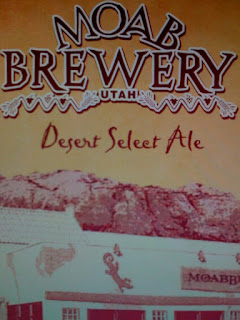 On the heels of a successful debut Moab Brewing started selling the second beer in their Desert Selct Series Last week. If your not familiar, The D.S.S. is Moab's first attempt at a true high gravity series, served in handsome one liter bottles.

Moab's Tripel is a pale colored, Belgian style ale made with Pilsen malt and a traditional addition of Belgian candy sugar, then hopped with German Noble and Saaz
hops. This ale has a light malt nose and a subtle hop aroma. In traditional fashion, this Tripel has been conditioned in the bottle to create natural carbonation and long-term stability.

If you never got the oportunity to try Jeff's Black Imperial IPA there are about 80 bottles left - only at the brewpub in Moab. Trust me, it's worth your time to get your ass down there and get some.

Next in the series is a Scotch Ale that will be ready in a month or so. I'll get more info on that as it's release gets closer.

Also, later this month Brewmaster Jeff Van Horn and some of his crew will be heading to Montrose Co. to pick hops at the San Juan Hop farms. Last year they picked 25 lbs of Chinook and dried them for use in the B.I.IPA. This is a pretty cool concept for area home brewers and pros alike. They also have their very own strain of hop found at a mine in the Telluride area that's being cultivated also.

It's nice to know the Moab guys and gals still get out and do things a little old school. Cheers!

That Jeff Van Horn has depth and akl;djf.a/
[session closed]

Jeff is the man! I haven't had the Triple yet, but the Black DIPA was awesome. I need to get down to Moab and have some beers with the man himself.

The black imperial IPA is delicious, well worth a trip down to Moab. Nice work Jeff!

Hopefully some will be left when I head that way next.