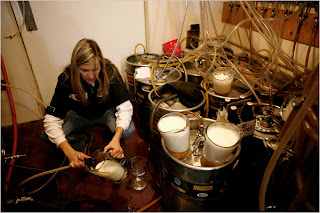 It may still say August on the calendar but trust me, fall is in the air... or at least in the tanks. Most breweries around the world are starting to shift gears and slowly transition their taps to the fall styles. Utah is no exception.

In celebration of Squatters 20th Anniversary, Brewmaster Jennifer Talley is releasing a special lager that is synonymous with Autumn. A Märzen.

The Märzen or Oktoberfest style are the beers that have been served at the like named event in Munich since 1818. Traditionally Oktoberfestbiers were brewed in March and allowed to ferment slowly during the summer months.

The "20th Annibrewsary Lager" as they're calling it is being released September 1st and will be available in 18oz bottles at Park City and the downtown SLC Squatters locations. Squatters will also be releasing 1 liter flip top jugs for out the door sales. They'll be pre-filling the jugs and only releasing 50 a week until they are gone(about 4 weeks worth).

Jen describes the 20th Annibrewsary Lager as having Biscuit like character that softly blends with notes of light toffee to give this malt driven lager it's true Märzen character. German noble hops offer an eloquent balance to the malt complexity and make this medium bodied lager wonderful to enjoy by all. 20th Annibrewsary Lager is a traditional German Märzen. The ABV is at 5.5%.

The Märzen is one of my favorite lagers, I can't wait!

Also, Jen is releasing her Altbier "Alt and in the Way". It's due out at the end of August. Squatters won a gold medal for this at World Beer Cup in 2008. "Hop Riot" her classic American Pale Ale just went on tap, it's packed with Amarillo, Cascade and Chinook hops. Prost!
Posted by Mikey at 4:06 AM

So they have 18oz bottles for drinking in house and 1 Liter flip tops for limited takeout? Why not just sell 18 oz bottles to the public from the brewpubs?

They have .5 L for in house and the "commemorative" 1 L jug with fliptop for take home. Don't ask me why. Don't ask for my opinion on pricing either.

Oh and it is, how to say it right?
FUCKING GOOD.

I'm highly impressed with this beer. Jenny and Jason didn't just hit the nail on the head, they nearly drove the spike clear through the tie. It was said..."reminds me of sitting in a tent in Munich." I couldn't agree more.

Come Sept 1st get your asses over to the brew pub and get some.

Thanks, O' Illustrious Potentate. I can't wait to get my Marzen-on!

Sounds awesome. So what I am wondering is if the 1 Liter bottles for take-out are filled via tap or if they are regular bottles that will last awhile. If it is 3.2+ beer I guess it will have to be a 'regular' bottling, verses a growler fill. I can't wait to try it.

I think you answered your own question Dougie. You crack me up!