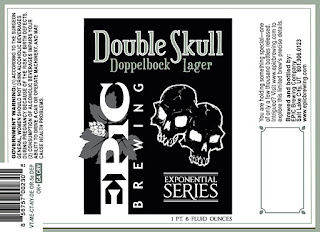 First brewed by the Paulaner monks, Dopple Bock beers were born from a need to sustain the monks during times of fasting, particularly during the Lenten season, when solid food is not permitted.

Today's Dopplebocks have changed very little in the last four hundred years, they're still some of the strongest beers made—ranging from 7%–12% or more by volume.

Epic Brewing is carrying on the Paulaners traditions, producing it's own take on "liquid bread". The latest beer in the “Exponential Series” is Double Skull Doppelbock brewed from only four traditional ingredients: malt, hops, water and true lager yeast. The beer is malt driven and true to style with a dark brown color and packs a nice wallop for a lager, coming in at around 7.5%

Double Skull will debut on December 21st at the Poplar Street Pub in S.L.C.
This beer was designed for lent, but I think you'll find it hits the mark during the Holidays as well.

No -ator in the name? So much for tradition. :)

Two new beer releases on the 21st! I wonder whose panties will be in a bunch about that "coincidence"?

Anonymous #2, what is the second beer to be released on the 21st?

The other beer on the 21st is Barrel of Russians.

Oh yes, thats right. Hmmm, what to get, both are right up there among my favorite styles.

Why choose? The 21st may be the shortest day of the year, but it's defiantly long enough to enjoy both of those beers!

Hi you are doing a great job. I found it on your page its really amazing. Thanks for sharing such a valuable information. I am sure that these are your own views. I hear exactly what you’re saying and I’m so happy that I came across your blog. Thus, you made me feel like I should learn more about this. I’m officially a huge fan of your blog.

Are you saying that this follows the reinheitsgebot?

I said nothing about the reinheitsgebot.

Whoo-hoo! I love Dopplebock. I'll end up spending the day running around looking for new beer on the 21st.

Epic has a new Saison there as well.