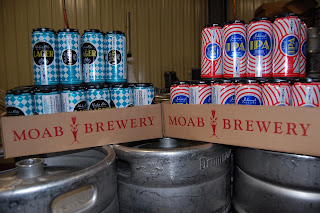 It was around this time last year that Moab Brewing announced that they were expanding their operations and changing their packaging from bottles to cans. Today it's all come to fruition, the expanded brewery is on line and cans of new Moab beer are hitting store shelves.

Moab's new packing revolves around 16 oz cans that come in 4-paks. The first two new offerings are Johnny's American IPA and Rocket Bike Lager. Johnny's IPA is described as a golden colored session-able IPA with four types of hops used and the Rocket Bike is a Steam style lager with roasted barley and Cascade hops.

In the near future Moab will start producing these brands in higher alcohol versions. The IPA will be 7% and the Steam Lager will be 5.5% abv.

And that's not all. In the coming months look for two new Desert Select styles a Rye beer called Hopped Rye and an Export Stout both will be upwards of 8% and bottle conditioned.

The 4-paks are said to be going for around $5.99 and are for sale now in select areas.

On a personal note, I'd like to thank everyone for coming out to the Holiday Tasting last Saturday. It was our largest event so far and the quality of the beer and the company was second to none. I'll post some pics from the party on the Utah Beer Facebook page today or tomorrow.

First, the party was awesome! I was doing fine till Big Mike put on that yodeling, that fired me up:) Also, I saw those 2 Moab beers yesterday. My constant question: are these re-branding or totally new beers?

These two canned beers are new. Where did you see them at?

I saw them at Dans on Foothill. In 4 packs I believe.

Smith's has them now, too.

I picked up some at Harmons in WVC last night.

Had the IPA, much better from Moab. I used to work there, afterall ;)

Had the IPA, much better from Moab. I used to work there, afterall ;)