No Help for Breweries and Wineries 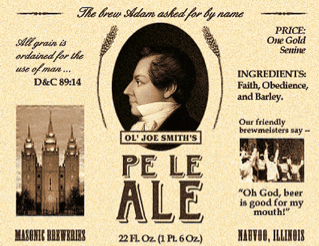 In case you didn't know, this is Sen Mike Waddoups' final year in the legislature. Congratulations to us one and all!

However, Jebus' favorite son is not about to go quietly into his righteous night. The "Wad Man's" crusade to extinguish the joy from those of us who support local craft brewers and vintners is a strong as ever.

SB66, a bill that would have reduced state price markups for small breweries and wineries was murdered by Sen. President Waddoups yesterday afternoon.

Waddoups, R-Taylorsville (congrats Taylorsville!), argued that reductions in the state’s alcohol taxing structure could spur more production, which he contended would lead to more drunk driving and teen drinking problems, without offering specifics to back up his claim. Does this surprise you?

There are two other bills that the "Gang of Mos" are unlikely to pass.

Rep. Gage Froerer, R-Huntsville, is sponsoring HB270, which would raise the number of restaurant liquor permits that are based on the state’s population. And, SB75, sponsored by Senate Minority Leader Ross Romero, D-Salt Lake City, would increase bar permit numbers, allow drink specials and get rid of Beer Burkas, which hide the evils that bartenders do from public view.

"That’s news to me," Romero said, reacting to word that his bill may not be passed. "We have already exceeded the number of liquor licenses by population, so we’re living in a reality that’s not accurate.

"I think it’s unfortunate that these ideas won’t even be getting a hearing this year."

I don't want to see any harm come to "the Wadd Man". But when he does eventually pass, I'll be the first to posthumously baptize he and his family in to the true church of beer.

That label is brilliant! I've thought that would be a great beer name...

The Wadd is a such a self-righteous prick. I wonder, will things will get better if he follows through on his past statement about not running for (an inevitable) reelection?

It doesn't matter if Waddoups (What is a Waddoups?) rides off into the sunset, two-thirds of the folks on the hill answer to those in the tall building just at the bottom of said hill and won't do anything to "increase" the amount of alcohol that moves through this state. For a bunch of people that harp on the economy so much, they sure are doing a good job of pressing their boot heals against part of it.

Mike you should just have him baptized gay: http://alldeadmormonsarenowgay.com/