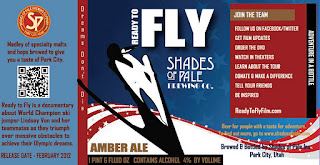 On February 10th, Documentarian Bill Kerig, the producer of “The Edge of Never" will have the Utah debut of his newest documentary film "Ready to Fly". Kerig's latest doc follows the struggle of Women’s Ski jumping acceptance as a recognized international event in the Winter Olympics and stars Park City's own Lindsey Vonn along with her team mates, as they do battle on the international circuit of public opinion.

Ready to fly ale is a deep American Amber with enough bitterness to mellow the truck load of crystal malt used in the recipe. Trent and Matt selected Cascade and Warrior hops to provide citrus undertones to complement the caramel flavors of the malt bill.

You will have 2 chances to get your hands on this tasty limited edition treat. First at the premier on Feb 10th, at the Megaplpex theater at the Gateway Mall (Believe it or not they are going to allow Shades of Pale to serve it in the theater), the second changes will be at the Egyptian Theater in Park City February 18th and 19th. Trent says, they'll only be releasing about a thousand bombers, so when it is gone it is gone.

Also, Shades of Pale has a new map on their website to help guide you to the nearest SOP store, bar or restaurant.

congratulations utah breweries, yet another "special" release american amber with crystal malt and enough hops to balance it out. talk about creativity.

Wow. that was kind of a 'dick' thing to say.

it might be 'impolite', but if utah beer drinkers continue to accept the same old stuff breweries will continue to produce the same old stuff. doesnt matter if its the best amber ale ever made, its still a really boring idea. i mean seriously, how many special release amber ales have we seen in the last year billed exactly the same way as this one?

Not to state the obvious or be sarcastic.. but you have made it to easy. How many Limited Edition beers have you produced and distributed??

Until you can brew and distribute your own beers I recommend appreciating the award winning beers Utah makes.

Someone pour some Natty Ice in a corked and caged bottle; then throw in some bacon grease, cherry sno-cone syrup, and whatever else people who value gimmicks over quality are calling "creative" these days.

Whats Going down i am new to this, I stumbled upon this I've found It absolutely useful and it has helped me out loads. I am hoping to give a contribution & aid different users like its helped me. Good job.
Easy Starter Exercise Kit

I would think that this is also a special release because it supports a great film/story. It's not a gimmick it's called getting involved with the community... Can't we just appreciate a good beer and not expect small breweries to re-invent the wheel everytime???