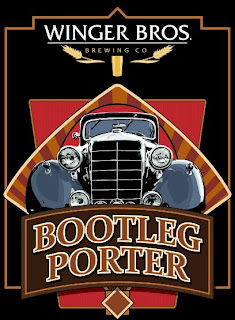 We're always on the lookout for new beer around here, so I was overjoyed when I came across Winger Bros. Brewing Co. I thought, A new brewery?? How the hell did this one slip in below the radar?

So, we did a little digging. As it turns out Winger Bros. Brewing is part of the Wingers Restaurant Group. I tried contacting Wingers Corporate about their operations, to no avail. Their website claims they produce four different beers and that they have a commitment to craft brews, but I can find no info on their brewing facility.

Well, there isn't one... at least that owned by Wingers. As it turns out Winger Bros. is contract brewed locally. The contract brewery asked that I not identify them yet, but you can probably figure it out.

Regardless of who making their beer - it is local and I whole heartily recommend trying them when enjoying a meal at Wingers restaurants. They are all familiar, enjoyable and solid beers.

I hope that Winger Bros. Brewing decide to go legit and start a true craft brewery with unique labels. Trust me. If you make them, we will come!

Also. If you like what we're doing here at Utah Beer, please vote us "Best Local Blog" in City Weekly's Best of 2012. Thanks for sticking with us!

So they're made at Unita? Re-branding of Uinta beers?

My buddy's sister used to manage a wingers, it is Uinta who makes it.

So could we get a list of which Uinta beers are sold in Wingers and under which names?

Ya I have one of the first growlers they stocked and I swear it said Uinta brewing. I will have to dig it out.

I work at Wingers. We have entered a co-op with Uinta Brewery. They brew our beer to specific standards and recipe. We essentially rent kettle space. They are hand crafted Winger Bros recipes.

That's good to hear that they're original recipes.