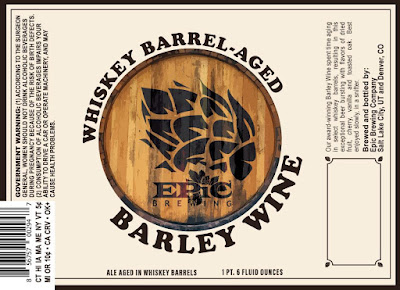 I managed to get my hands on some of the new things that Epic Brewing Co will be selling in Salt Lake City in the near future. The first one is long overdue in my opinion, I can't believe this beer hasn't got the barrel treatment before. Epic's Whiskey Barrel Barley Wine takes their American Style Barley Wine and gives it a sabbatical in (as of yet) undisclosed whiskey barrels. No word yet on when this beer will be finished.

The other beer isn't really new to Epic but it is new to SLC. Originally created under the name Kaffeina, this beer was brewed in collaboration with Denver, Colorado's Crafty Ladies Beer Club. Coffee Cream Ale (as it will be called in Utah), is described as having a huge and unexpected roasted coffee aroma. The fruity ale esters blend perfectly with the lightness of the roasted coffee and suggest orange blossoms and pomegranate with butterscotch sweetness from the malt. The finish is mildly tannic and returns to the roasted quality of the aroma.

Both should be a welcome addition to their SLC Lineup.  Hang in there, release dates will be coming soon.

Images found at Shipcomplient.com
Posted by Mikey at 3:52 AM

Look for that barley wine later this summer. Supper limited and delish.