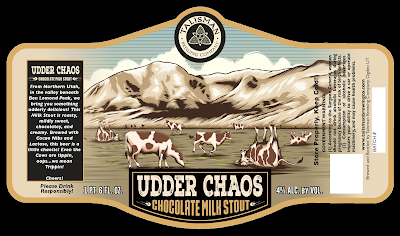 Rejoice! More new beers are coming your way and I'm happy to be able to give you a preview of the liquid happiness that will be making it's way to your fridges soon.

First up we have Udder Chaos from Talisman Brewing. Besides having a great name, this milk stout will be full of chocolatey goodness and lactose sweetness. It will dial in at 4% and I hope that means it will be popping up at my local grocery store sooner rather than later.

Next up we have another dark beer that should be showing up sometime this week. Sweet Dreams from Shades of Pale is an Imperial Porter that will come in at a hefty 9.5%. This beer is big on roast, char and malt sweetness. As soon as SOP slaps those labels on it'll be good to go. Give 'em a few days.

The next beer up isn't really new, but it's a new look for a beer that will soon be a major part of our late summer/autumn drinking.

Bohemian's Oktoberfest is one of the more widely available locally made marzens and this one usually pops up near the end of August. Look for it in 12 ounce cans. This beer has a clear amber-orange color with a good two fingers of white head. The nose is mostly malt driven with caramel and citrus highlights. The flavor has a mild maltiness with a bit of vanilla and a slight bitterness. Average carbonation with a medium/light body. 4.0%.

Stay close for the release dates on these and other new beers.

Images found at Shipcomplient.com
Posted by Mikey at 3:56 AM