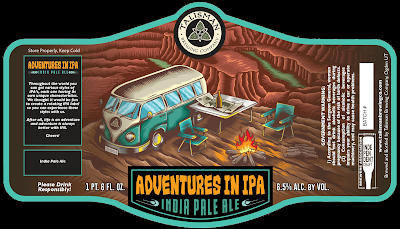 In an attempt to keep it clear; in regards to previewing new beers vs. announcing their arrivals, I'm going to implement the New Brew Soon for You title. Often people think some of these preview blurbs are the official release for these beers. Hopefully this new strategy will keep it clear. Capisce?

You have a new IPA coming soon from Talisman Brewing soon. The Ogden brewery will be offering this rotating India Pale Ale called Adventures in IPA that will feature a different hop bill every quarter or so. Props to Talisman for keeping things interesting in regards to their IPAs.

Also in the new brew soon for you column we have a collaboration beer with Salt Lake City's Local 81 Firefighters and the RoHa Brewing Project. The Maltese Cross is will be made especially for these firefighters (and for charity), this beer is specifically designed to be enjoyed after those long 48 hour stints that our local heroes endure, all to keep us safe.

Stay close for the release on both of these "New Brew Soon for You beers and others as soon as the hit.

Images found at Shipcomplient.com
Posted by Mikey at 5:45 AM