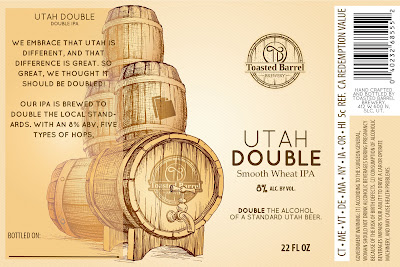 This morning I have a preview of what you can initially expect from Toasted Barrel Brewery: Utah's first brewery dedicated to spontaneous and wild fermented ales. If you're not familiar with the processes of these niche beers; I'll oversimplify by saying, they take a while. So when the brewery goes on line in the coming months, they'll need some "fast beers" to get the ball rolling.

Above you can see the label for Toasted Barrel's Utah Double Wheat IPA. It will have an ABV of 8% and come in 22oz. bottles.

The Four Seasons Saison will be a rotating beer that will feature different flavor profiles every quarter. Saisons are yeast driven and this one will be on the drier side. This will be a 4.0% beer, so you may see this on draft as well as 22oz. bottles.

Doll Face IPA won't be your typical IPA. This Belgian influenced ale will have a wheat base like the Utah Double but will have the addition of sweet orange peel, coriander and a special yeast blend. Hops will of course be center stage on this one. this beer will dial in at 6.5% ABV and also be in 22oz bottles.

Not all sour beers take an obnoxious amount of barrel time. The Weisse Man will be Toasted Barrels Berliner Weisse. Berliners utilize lactobacillus to tarten-up the beer. It imparts a nice lemony profile that takes as much time to make as any ale. At 4.0% it likely be a refreshing treat. 22oz bottle and draft are your deliver systems here.

If you want to see these beers and their wild fermented siblings much sooner than later, please consider helping out Toasted Barrel with their relatively small Kickstarter campaign. The brewery is looking for an infusion of quick cash to help it cover additional costs and clear some extra hurdles. Helping them to meet their goal could mean the difference between an opening in March versus this summer. Backer will receive gifts of varying levels including a bar stool with your name on it. Here's the link to their Kick starter. Let's get this beer train moving people!

By the way, you may have noticed the map at the top of the page. I've created a map of Utah's Craft Beer location around the state. It includes Breweries, Brew Pubs, Beer Pubs, and Home Brew Shops. I hope you'll find it useful.

All these beers sound awesome, can’t wait to try them. But I kind of question the marketing angle of promoting the wheat IPA as double strength. There are tons of Utah beers in that ABV range. Who are they marketing to? Tourists? Has that label been submitted to and approved by the the TTB? While the UDABC typically rolls with TTB label approvals, I can guess that they are not going to be real excited about that label and it could possibly affect Toasted Barrel’s chances of getting that beer listed in stores.