New Brews, Soon for You: RoHa, Roosters, Uinta and Saltfire 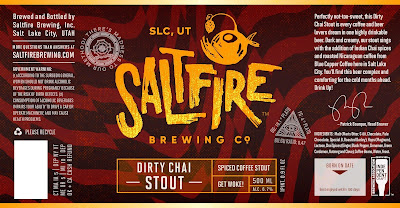 In today's New Brews, Soon for You file we have seven up and coming beers from four breweries. This looks like a really interesting bunch of beers. Can't wait to get my hands on these.

We're going to start with another addition to Saltfire's initial line-up. Last week I brought you the first peek of South Salt Lake's newest brews. Today, I have an additional beer to add to those. Dirty Chai Stout is described as a "spiced coffee stout" that is made Indian chai spice and Nicaraguan coffee roasted by Blue Copper Coffee Roasters. Yes!

The RoHa Brewing Project will be releasing a new Belgian style Nights Out. This is described as a robust stout made with Belgian yeast and spices. it will be packaged in 12 ounce cans and will have an ABV of 8.7%.
stout called

Uinta Brewing has a pair of interesting new beers on the horizon as well. I guess we'll start with their limited release beer called Ancient Ale. The only info we have right now on this one is that it's made with "ancient grains and honey". This beer could end up going in any direction. I'm curious to see what they come up with. Look for it in 12 ounce cans.

The other newbie from Uinta is called Crimson Tart. This ale will be brewed with natural
pomegranate; no idea on what the base beer will be. This beer will also come in 12 ounce cans. This is also a limited release beer and there appears to be no ABV listed for either of these Uinta beers.

That's a nice, round selection of new brews coming soon to you, eh?

All labels found at Shipcomplient.com
Posted by Mikey at 5:48 AM