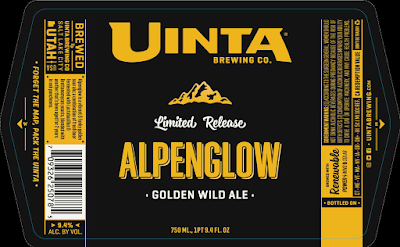 I came across a few beers that are coming soon to a brewery near you. Each of these beers have (as of today) an unknown release date. I promise to keep you in the loop as to when they hit the market.

Pictured above is Uinta's Alpenglow. Named for a unique phenomena that happens for those of us
that live in mountainous regions of the world. This new beer will be an golden American Wild Ale that is fermented with a combination of Lactobacillus and Brettanomyces that will also be blended with a two year old funky sour beer aged in oak. It will have an ABV of 9.4%.

Also from Uinta Brewing is their new Single Barrel Series. This label is described as being an outlet for Uinta's R&D department; it will feature beers that are new, different and experimental. A special section on Uinta's website will be created for feedback on these beers.

Coming soon from Vernal Brewing is their new Summer Ale. This

ale is just described as being brewed with herbs and spices. Look for it to hit cans in the coming weeks with a quenching ABV of  5.5%. No idea, as of yet if it will go to DABC stores. Keep checking back for info on this one.

Shades Brewing Company (formerly Shades of Pale) will be releasing a new Belgian Style Tripel Ale. This beer is described as having huge huge spicy and fruity flavors of coriander, peach and pear, while having a dry finish. It should come in around 10.0% ABV.

Salt Flats Brewing has a Mexican Ale coming soon. No info has been posted on this as yet, but look for it to fit the mold of hot weather, south of the border beers that are generally light and dry. As soon as the updates come in I'll share them will you. This ale will be a 4% beer.

That's it for this edition of New Brews Soon For You. What do you think of these impending beers?

Thanks for the info. I'm new to Utah beer (well, all beers actually) and your site has helped me navigate things more easily. I'm really excited for this new Shades brew. I had my first Shades yesterday, their Tripel St. Blackout, and loved it! I found it hard to believe there was 10% ABV in there. So tasty!! Thanks again for all the info!

Cheers, Quinn and welcome to the Utah Beer community.