Utah's next brewery will be here sooner than you think. If all goes well, you'll see Grid City Beer Works in early March 2020. I was invited to check out the new South Salt Lake City brewery, and have some interesting things to report. 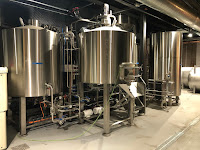 The brewery occupies the old, Tile for Less building located at 333 w. 2100 s., right across the street from Home Depot. The real estate has undergone a complete transformation from top to bottom. The building's lid was removed and a new one was constructed so that it could support a new roof top patio and an additional bar area.

The brewery is showcased behind a horseshoe shaped bar that is open - without glass barriers that allow for the full sensory overload from the brewing process. Adjacent to the brew house is a full kitchen that will deliver a full range house-designed, pub fare to pair with the house beers.

Speaking of beers: Grid City will be debuting with four beers. A pale ale, brown ale, a pilsner and acream ale. A fairly simple offering, however, what will make this presentation different from any other brewery anywhere, is that all four of these beers will be served three different ways – conventional carbon dioxide, nitrogen and on cask - via  four separate beer engines. Owners, Justin Belliveau, Drew Reynolds, and Brewer, Jeremy Gross believe that providing these time honored, age old formats; on top of everyday CO2 will educate and stimulate their customers palates and will keep them coming back. Right now the plan is to provide draft options but cans are in the works down the road.


There are a lot of secrets that I've been asked to withhold. Normally, I'd provide some more detailed photos of the bar and other interesting aspects of the brewery to help give you a better feel. However, the Grid City boys would prefer that you experience the brewery that they've worked so hard on with fresh eyes, for your first visit.

I can reveal that they've acquired some Czech made, side pour, Lukr faucets for their pilsners. You may be familiar with these if you've been to the Templin Family Brewing Co. These provide a quicker pour with better head retention. It's real nerdy shit, and we love real nerdy shit.

As soon as they nail down their opening date, you'll see it here. I promise. Again, thanks for bothering to waste your bandwidth here at Utah Beer.