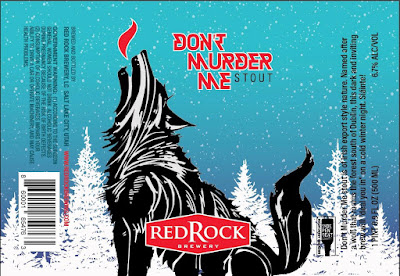 We haven't done a New Brews, Soon for You preview in a while. If you're not familiar with our little word salad phrase, It's a basic preview of beers that are coming to brewery near you, in the near future. These beers ARE NOT available as of the date of this publishing, and we promise to fill you in, when they do hit the streets.  Let's begin.

We'll start with Epic Brewing Company's Oak and Orchard: Ginger and Lemongrass. If you're not familiar with the Oak And Orchard Series, It's Epic's foeder aged sour program that offers up new blends of oak aged beers with common and uncommon fruits, spices and various types of produce. This upcoming version will obviously feature ginger and lemongrass. Epic really nails these sours and I can't wait to see what they come up with here.

Red Rock's "Don't Murder Me" (above) will be an Irish Style Export Stout. I don't have a lot of info on this beer's theme. I think it refers to the Grateful Dead's tune, Dire Wolf. Anyway, if you're not familiar with Export stouts, they're higher in alcohol (less than imperial stouts) with very pronounced roasted character with a soft bite. it will dial in at 6.7% and be packaged in 500ml bottles.

Corduroy from the Templin Family Brewing Company will be a Juicy India Pale Ale. What's the difference between a "juicy" IPA and a "hazy" IPA? Not much really. If you call it "juicy" it defiantly sounds more appealing, and it doesn't necessarily have to be hazy or turbid. All of that aside, T.F. does this style right and rest assured, this one will sell out when it eventually goes on sale. This will have an ABV of 7.7% and it will be available in 16 ounce cans.

Uinta Brewing finishes us off with their Piña Colada Milkshake IPA. These are mostly fruited IPAs with lactose added for sweetness and body. The result is a smoothie-like IPA that often blurs the line between beer and malted milk. These are terribly popular right now and they kill in the markets that are selling them, this will likely 'kill' as well. You'll probably see this 7.0% ale in 12 ounce bottles in the coming months.

I have more New Brews, Soon for You that we'll be publishing soon, so stay close.

Images found at shipcomplient.com
Posted by Mikey at 4:00 AM