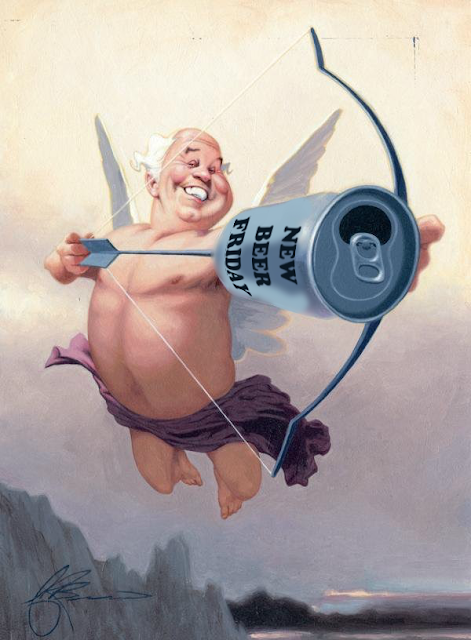 It's going to be a beer filled Valentine for sure. Buy your sweetie one of the new brews and you'll be pitching woo fer sure.

Templin Family - Jesse Delmar: This Barrel Aged Imperial Stout is big on chocolate coffee notes and it hits with a big whiskey wallop. This the full barrel proof, no blending down of the aged beer; dialing in at a solid 12.0%. Very nice stuff. Available at TF.

Avenue Proper - Wolf Mountain: This has an aroma of citrus peel and heavy pine. Creamy malts at first sip then your met with a huge blast of dank pine, with some citrus and herbal hops. This one lights up the sides and bottom of the tongue. Its more of a pale ale with super hoppy bite. 5.0% - Only at Avenues Proper.

Squatters - Blonde Latte: Nice coffee aroma and flavor here. There is some higher than normal sweetness due to the addition of lactose. It all comes across as the latte the name implies. This is not a vegan friendly beer. 5.0% Available at Squatters Downtown.

Squatters - Dragon Slayer: This IPL starts off super dry. The hops are a blend of citrus peel and old world German hops and herbal spices. this is all IPL with little IPA character. Super crushable. 5.0% Available at Squatters downtown.

Desert Edge Cashmere in the Rye: Haven't had this one yet. By the name it appears to be a rye pale ale with Cashmere hops. 5.0% Available at Desert Edge and the Bayou.

Toasted Barrel - Juicy Double IPA: This just hit late yesterday afternoon. I missed it. All I know is that it's described as having five different types of hops. 5.0% Limited batch, available at Toasted Barrel.

Roosters - Winter Blues: This another hazy IPA except this one is made with blueberry purée, butterfly pea flower and Mosaic hops. I haven't had this yet, but its piqued my curiosity. 5.0% on Tap Now at Roosters locations and at Slackwater in Ogden as well.

Silver Reef - White Dome: This is a Belgian white IPA brewed with wheat and candy sugar. Hopped with Nugget, citra, ekuanot and crystal. 6.75% - Only at Silver Reef

Coniston Brewing - Bluebird Bitter: Caramel malts are noticeable at first. Then spicy hops come in and add a surprisingly sharp punch of bitterness. The bitterness starts to fade quickly though, transitioning to a sweet malt finish. 4.2% - Exclusively on draft at the Bayou.

Libertine - Plumphry’s McGee: I missed this one. This is a tart Dunkle made with plum. 4.5% - Exclusively on draft at the Bayou.

To Øl - Fuck Art - This is Architecture: The taste starts out bready with Belgian yeast and a hearty malt character. Then a strong but not over-powering hops bitterness comes in. The finish is slightly bready and bitter. 5.0% - Exclusively on draft at the Bayou.

Founders - Mountain Brown: Missed this one. 9.0% Found at the Bayou

Founders - Canadian Breakfast Stout: Missed this one. 11.3% Found at the Bayou


Stone - Viking Space Probe: Missed this one. 8.5% Found at Beerhive

The following are limited small batches from Hopkins Brewing.