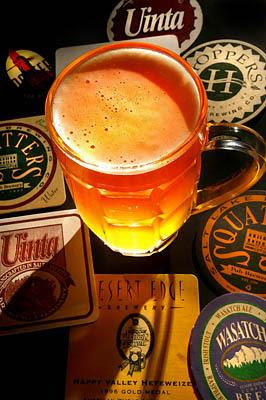 To help celebrate the signing of HB51, local brewpubs in Salt Lake City and its surrounding areas have decided to create a special beer to commemorate the legalization of home brewing in Utah. As well as to salute our local home brewers, all the while having a little fun in the process.

Desert Edge, Hoppers, Red Rock, Wasatch, Bohemian and Squatters brew pubs will be brewing the same beer but with one very specific variable either altered or added. All malt, hops, water, and timing will be identical, but each brewery will integrate one different variable to show their customers, especially the local home brewers, what changing one important factor can do for a beer.

The brew is a session amber ale and will be on tap at all 6 brew pubs. The Desert Edge version will be unfiltered, Hoppers will be aging with oak, Red Rock will offer it filtered, Wasatch will dryhop, Bohemian is going to ferment it with lager yeast and Squatters is making it
with whole Amarillo hop flowers added via hopback.

The release date of the HB51 beer is May 1st. it coincides with the Big Brew National Homebrew Day, May 2nd. Those interested can pick up a recipe sheet at each of the 6 brew pub locations.

I'm not sure if the official name of the beer is HB51. I'm sure all appropriate suggestions will be considered. But one thing is certain this will be a great thing for Utah's growing beer culture. Cheers!

What a great idea, looking forward to trying them all!

I'm sure all appropriate suggestions will be considered.

Ironic that the beer the brew to commemorate is amber ale...
oh well, just glad to be legal..finally..

This is great. I actually bottled a batch of Belgian Tripel on the night that HB51 was passed in the Senate and promptly named it HB51. It's turned out to be one of my favorite batches!

Yeah, this is an interesting idea. I'll try them all (of course), and we shall see which one turns out best. This is the cool kinda stuff we need here to liven up the beer scene.

I have the home brew recipes if anyone is interested. Just contact me at The Beer Nut and the recipe is yours!
Thanks for the post Mikey.