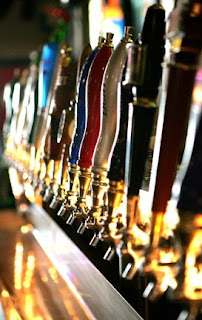 Well the cat is out of the bag. If you haven't heard there's this bill on the hill that was quietly introduced at the beginning of February that would allow beer above 4.0% abv to be sold on draft in Utah.

HB349's original intent was to make it easier for beer distributors to get a wider range of products out to costumers, by bypassing the DABC warehouse all together. The bill would also give buyers the ability to negotiate prices, instead of buying the state of Utah's set rate for high ABV beer that we all pay. This could mean better prices beer in the state.

But as I mentioned earlier, the part of this bill that has everyone in tizzy is the promise of high ABV beer on tap. This would create a whole new market for beer in Utah. Without the 4.0% restriction brands from all over the world could be making it's way into Utah. Your favorite Portland brew could be on tap a your favorite watering hole in as soon as 6 months.

There is a downside however. Local breweries that have made it their business by selling established 4.0% brands such as Cutthroat Pale Ale and Polygamy Porter will loose their state imposed monopoly on the taps. If you go to any decent be bar in town you'll notice that the majority of beers on tap are local. And frankly, that's the way it should be.

Will the local brewers tweak their recipes to make higher ABV beers to compete? Will local brewpubs be given the ability to make stronger stuff on tap for customers? The bill at this point is just too vague and convoluted to say.

For this reason many (including myself) think this bill will never make it in to law. Even though it has passed favorably in the House.

Bar owners that knew about the bill have been sitting on this hopping that it would slide beneath the radar and pass into law. That's why it's gotten so little play in the press in this unprecedented liquor reform session at the Capitol.

they need a amendment that states that bar owners need to leave some taps open to local beers .

Agreed. There is a tax advantage for locally made beer though. Wheather bar owners will pass the savings on to customers is an other story.

It's time for Utah to take a step forward and join the rest of the country. Since I moved to Utah a year in a half ago I still get ignorant people from back east that believe that Utah doesn't serve booze and/or doesn't get you drunk because it's "fake". Passing this bill will really help on tourism, not that I want tourist crowding my watering hole but I'd like to enjoy drinking a real heady brew when I'm out. If anything I'd really just like to see the private club membership done with.

I totally disagree with any requirement for local beer. The local beers have so many built in advantages already: 1) they have had a near monopoly in good beer on tap, and customers are already loyal 2) they are taxed less, lower transport costs and 3) they are crafted toward the local community. No bar is going to get rid of great local beers like the Wildfire Pale Ale or Cutthroat. Instead, great local beers like Squatters IPA and Uinta BW can be in tap. Imagine a Uinta BW on tap (some of us know how good it is at NABF). Lets not hurt our slim chances of getting this done by mentioning anything negative. Think positive. Also, can I ask this question: we now have a ton of beer related bills which have passed either house, and it seems that no bills have been signed into law, or even have passed house/senate conference committees, is this so?

The Gov has signed nothing yet and the only legislation to make it through both house & senate was the homebrew bill.

So the homebrew bill simply needs to pass the Senate/House Committee and then it is going to be signed. Hopefully this can happen. I think everyone should write their local Reps/Senators and encourage positive votes. I already sent an email to mine.

I would think that local breweries would up the APV on SOME seasonal beers that are usually only on tap. Other beers like Polygamy Porter don't need a change, since 4% is not unusual for a porter.

Dougie, HB 51 is just waiting for the Gov's signature.

Excellent. Why do I feel like a lawyer with all of these bills! Hopefully HB347, ending the private clubs gets some traction.

It doesn't matter anyway, PBR and Bud Light will always be the big sellers amongst the masses.

I believe that if all goes well local beer would still be on plenty of taps. Many good Utah beers that are kegged at 3.2 have sister beers that are bottled at higher % which would probably be easily kegged without too much change in recipe. Our beers are always taking recognition at the GABF.

I think this bill will do only good for beer drinkers in Utah. A lot of offerings, both "imported" and local, are/would be so much better on tap. I'm drooling now thinking about a possibility of Squatters IPA on tap.

If local breweries are worried, I would like to reassure them that there's no need to be. Not only will their offerings continue to call to me from time to time, but many also operate great pubs, which I will continue to frequent.

I think any law that requires a certain amount of beers served at a bar to be local is counterproductive. I personally would be offended by the suggestion and would drink less local beer if they lobbied and succeeded at getting something like that enacted. Utah breweries are, IMO, some of the best in the nation. I think they'll easily compete with any stuff that comes in from other states. And I can't wait to see what they can do with fewer restrictions.

I agree that this likely wouldn't hurt the locals too much -- since a lot of craft beer drinkers prefer to buy local, even in places with a better selection than what we get. Hell, Sierra-Nevada and Full Sail products are now substantially cheaper than the local brewers, but they still seem to be selling.

I guess it's possible that some recipes might have to be altered to make higher alcohol beers, just because of the bad rep of our "weak" beer. The vast majority of beer drinkers -- including craft beer drinkers -- have somehow convinced themselves that 5% ABV is "twice as strong" as 4%. When in reality, that's not enough of a difference to be noticeable in a few pints. But, perception is everything...

That being said; I doubt they would have to alter the flavor of the beers too much to make that slight adjustment.

We're having more or less the same debate over here. Colorado allows regular beer on tap and in restaurants, but not grocery stores.

The proposed law would allow grocery stores, gas stations, etc to sell full-strength beer. They claim they've been hurting since liquor stores were allowed to open on Sunday last year.

Craft brewers, oddly enough, oppose allowing their stuff into grocery stores. The reason being that they like dealing with independent liquor stores with local buying agents, but don't want to deal with Safeway's corporate buying department in California.

State law also has some protectionism built in because local businesses can bypass the wholosale step and sell directly to liquor stores. It makes local beer, wine, and even whiskey cheaper. But that advantage might be lost if you have to deal with Safeway or Wal-mart anyway. (See the details here.)

We'll see how it turns out. I'm sympathetic to the argument the craft brewers and liquor store owners are making, but I also think the 3.2 thing is just silly.

Also, a fringe benefit of eliminating 3.2 would be this: businesses like pizza companies can sell 3.2 on *or* off premise. Under the law, they could sell real beer on/off premise, which means you could order beer with your pizza delivery.

I moved from Utah 5 Years ago, They need to have laws like Colorado.

Can someone post a link to the bill? Utah's laws should be more like colorado for sure!:}

Could someone post a link to the actual bill? Im having a hard time finding it...Also I don't think there should be anything special for local breweries because like Doug said they already have a bunch of advantages and personally I cant wait to get other beers here I'm SOOOO tired of the selection in Utah

Dukt, your reading a post from the archive, from March 2009. This legislation never made through commitee.

Sick of Utah protecting us from ourselves. I don't need to be protected from myself.