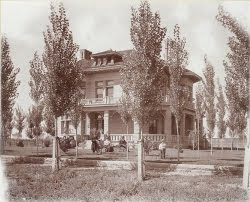 In the early 1870s a man named Albert Fisher immigrated from Germany to the United States and eventually settled in Salt Lake City. Albert was a brewer by trade and he quick put his skill set to work shortly after arriving in Utah.

In 1884, Albert Fisher purchased 15 acres of land on 200 South on the east bank of the Jordan River (1206 West) where he established the A. Fisher Brewing Company.

The Fisher Brewing Company quickly became the largest brewery in Utah and in 1893 he constructed a grand residence adjacent to the brewery along the banks of the Jordan River.

Salt Lake City, which now owns the historic mansion will be hosting an open house May 15, 2010 from 5 – 9 p.m . The Fisher Family and Red Rock Brewing Company will host the Albert Fisher Beer Garden on the mansion grounds. This is a great opportunity to get to know this great piece of Utah's beer history while enjoying great German food and local craft beer on the beautiful riverside mansion property.

From the examiner article:
Salt Lake City will be hosting an open house May 14-15, 2010, at the Fisher Mansion. Friday May 14 will feature a Victorian Gala between 6 and 9 pm. Saturday afternoon (1-4pm) will feature family friendly activities and then a beer/root beer garden between 5 and 9 pm.

Any clue about pricing for this event? Is it pay as you go?

I believe it's pay as you go. There will be various foods and drinks. There was no mention of price in the press release.

Forgot about this until now! Will have to check it out...