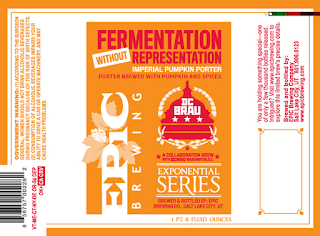 There are two places in the United States notoriously known for their lack of representation. Washington D.C., which has none - and Utah, who's minority drinkers are a nuisance more that constituents.

It seems likely that factions from both places would find some common ground and rage against those that choose not to hear them. Leave it to the beer industry to rock the boat.

The brewers collaborated on the recipe for a new Imperial Pumpkin Porter, which will be called Fermentation without Representation. While the brewers will follow the same recipe, they don’t expect the beers to taste exactly the same.

Crompton heads to the D.C. brewery soon to help Hancock make batches of the new fall-flavored brew for their market. Collaboration beers are a big trend in the brewing industry, said Crompton. He said it’s a great way for brewers to get together, learn things from one another and of course build unity.

Both beers will be released in Salt Lake and D.C. on Nov. 3.

I love the name. Too bad it will only be seen seasonally instead of daily - as a reminder to lawmakers of their failings.

I love the label, and really look forward to trying this one. I am so happy we have more choices for pumpkin ales this year. At least two new ones, Jacked and this one, when compared to last year.

I've seen this collaboration trend happening a lot lately. Glad to see it's happening here in Utah. Would love to see Uinta, Wasatch, Squatters, Epic, etc - all get together to do one recipe.

good luck getting utah brewers to even talk to each other let alone work together...

I love the name. Probably a great beer too.

That's weird is really weird that there's just a few drinkers less... haha in this country people actually drinks to much, i like to drink once in a while but no every day, but well each have the right to enjoy in the way they want.