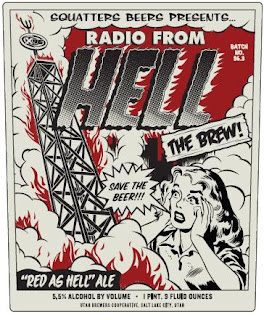 There are a lot of podcasts and radio shows out there that are dedicated to - or feature beer. But as far as I know, there's never been a beer made specifically to honor a radio show.

Well, Squatters has done it. In conjunction with X96's Radio from Hell Show the Utah Brewers Cooperative has developed a new beer that is described by hosts Kerry Jackson, Bill Allred & Gina Barberi as "Utah's first breakfast beer" (Radio from Hell is a morning show).

Red as Hell Ale, is coincidentally an American Red Ale. If your not real familiar with the style, these beers tends to focus on the malts, but hop character can range from low to high. They're mostly balanced ales, with toasted malt characters and a light fruitiness.

This brand new release will debut on February 7th, at 8am at The Beer Store (1763 s. 300 w.) The Radio from Hell Show will be broadcasting there show from there all morning.

The beer has an ABV of 5.5% and comes in a capped 750ml bottles. The price is a very affordable $3.99 per bottle and will be available at all Squatters location, The Beer Store and select liquor stores.

I for one, am very fond of the Radio from Hell Show. The fact that they're partnering with Squatters, shows that craft beer in Utah is officially in the mainstream and not just some foody anomaly. Can't wait to try it!

I heard the crew from Radio from Hell pitching this the other day. That's great stuff! And I for one don't think there are enough red ales in Utah. I grew up with a few always being available, and I'm not talking about Red Dog either.

When people know which liquor stores this pops up in, please let the rest of us know.