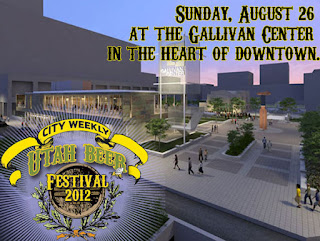 If the Mountain Brewers festival is too far of a drive for you or it doesn't quite satisfy your beerfest quota, the 2012 Utah Beer Festival should put you in your happy place.

In previous years the Utah Beer Festival has been held at Washington Square in downtown SLC. This year it's moving back to the newly remodeled Gallivan Center where most of our local beerfests have been held. This year the beerfest will be held on August 26.

This beerfest has sparked a lot of debate in the beer community. Many have called it unorganized and poorly planned. I personally don't think this is the case. Yes, the crowds are massive an the lines are brutally long, but in my opinion the festival as it is now is to small for the size of the Wasatch Front & Back. Here's my reasoning.

Too few breweries participate: Utah breweries are great, but the number of participating breweries can't possibly meet the publics demand unless each brewery triples or Quadruples their ability to serve.

Real estate: Washington Square was a full city block and it was never utilized. The Gallivan Center is much smaller and all of it will be utilized. This may cause more crowding and line problems if the numbers of tickets aren't greatly reduced.

The Number of Days: This in my opinion is the real key to making this a success. A two or three day festival would greatly reduces the burden on all parties involved. Brewers wouldn't need to increase their resources, crowd size could be limited and organizers could still make their bottom lines. Most everyone would be happy.

I've always had a great time at the UBF. I'd love to see it become life long tradition. What are your thought, anything I missed?

Well then we need to start a couple more breweries...

I still think that quadrupling the taps and entrances is necessary. Yes that means more staff but it will make things run 1000 times smoother.

In addition (or possibly instead of the above), every station needs to pour into pitchers and then have someone else pour from the pitchers into the glass. There is simply no reason for a tap to be closed at all (unless a keg blows) with lines as long as they are. The beer can be poured way quicker than it has been.

Ouch! Gallivan is going to be scorching hot on an August afternoon with little shade.

Thanks for the info Mike!

I was not able to attend last year, but I will make all efforts to come out this year!
Cheers,
Scott

Look, this isn't rocket science. GABF has a festival with 100x the people, and is very smooth. You need to provide way more beer, more serving stations, more space. The demand is massive, they need to recognize this and plan accordingly. Require a certain amount of beer to be brought. By the way, the could get tons of beer from outside of Utah that is 4% or less. If someone called around they could get out of state stuff.

Jamie said...
This comment has been removed by the author.
1:24 PM

I can't seem to catch a break with the comp. If it isn't the thing at Brian Head, then it is the Beer Festival. I try to schedule it early enough in advance to not have conflicts. Oh well. For those who are interested- I'm going to need judges for the competition.......

@jamie, wish i could help but im still trying to familiarize myself with BJCP style guidlines and identifying flaws.. if something tastes off with my homebrew, i just call it a belgian...j/k...lol

Jamie, I'd say for homebrewer crowd that the Beehive brew-off is a much more important event than the Utah Beer Festival.

While I am no judge (still working on that)I am happy to volunteer or steward.

I'm not going again until something is done about the lines. At this point, I'd much rather spend my time and money at Snowbird's Octoberfest.

We went last year and it was awful - long lines, poorly organized, hot. Will not be returning until we hear that it's more organized and you can actually get a beer within a reasonable time frame.

How was this years Festival? Just wondering if I should plan on gong next year