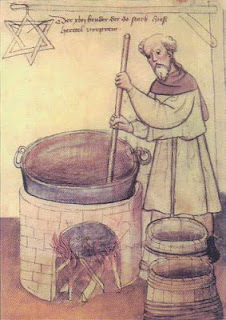 Believe it or not, our favorite lagering house, the Bohemian Brewery is ten years old this month. To celebrate, the brewery has some limited Edition 10 year Bohemian Brewery Pint Glasses and of course, a special new seasonal offering for the Occasion!

Bohemian's newest seasonal is an obscure traditional lager that hails from a small area of northeastern Bavaria near the Czech Republic, known as Zoigl Bier.

For centuries, Zoigl was brewed in brewhouses owned by the town or an association of homebrewers. The wort was then brought to the private cellars of the brewers, where it was lagered until done. Then the beer was tapped directly from the lagering tank and sold in the private rooms of the brewery, which were used as a pub.

While Bohemian's Zoigl isn't a collaborative Homebrew it does pay homage to it's nearly 700 year old roots. Zoigl is unfiltered, brewed with highly kilned malt, which gives the beer a slightly darker, deep amber, color and malty taste. Zoigl is also brewed with noble hops from the Hallertau region of Bavaria.

This is a limited release. I doubt it will make it to the end of April. It's available right now, only at the brewery in Midvale.

Do you know if they bottled any of this great sounding stuff or is it just on tap?

It is an incredibly tasty beverage. Can't recommend it enough.

This was very good. Really nice, but not overpowering maltiness. And surprisingly refreshing for a bit darker beer. I hope they put this one out fairly frequently.