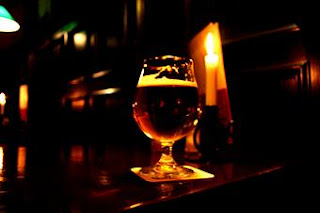 Let's face it, Mexican beers don't get a lot of respect in the craft brew community. They are without a doubt one of the lesser appreciated North American made beers. In many cases I get it, the corny/grassy profile can get a little old and their reputation as a "kiddie party beer" can drive the serious beer officianto away.

Secret agent and Hoppers Brewmaster Donovan Steele would like to change that with his new Mexican Lager Cervesa de Media Noche (Midnight Beer).

Midnight Beer is a "dark" Latin American lager made with a Vienna and Pilsener base malts, a small amount of Chilean chocolate malt, Chilean dark caramel malt and some flaked corn for a hint of flavor typical of the style. The nose is full of Styrian Golding hops that impart a spicy sweet hop flavor and aroma. Nice drinkability yet slight malt leaning complexity, medium body, dry finish, full flavor, highly drinkable, refreshing, and pairs well with spicy or grilled foods. A perfect beer for our early summer temperatures. On tap now at Hoppers in Midvale, this one won't last long.

Sounds really tasty. I'll have to pop by this weekend.

People should check out Wasatch's Vanilla Porter on cask, it is awesome!

Where did you have it?

The brewpub in Park City

I've found the vanilla porter on cask a few times at MacCool's. Indeed, it is awesome.