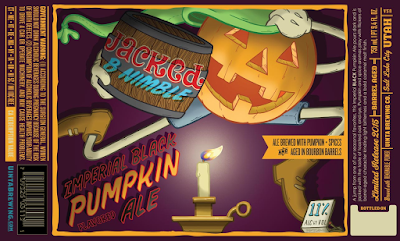 Pumpkin beers lately have been getting a bit of a bad rap in the beer geek community as of late. Too many breweries have worked them into their repertoire and turned them into their default autumn beer. If I were to approach you at this time in 2005 and offered you a Pumpkin ale you'd probably look at me like I was broken. Now a days everything gets the pumpkin spice treatment down to our meatloaf.

Luckily, the pumpkin beers that come out of Utah are pretty damn good and worth revisiting. Some have actual pumpkin - others just the spices that make them unique. One of my favorite Pumpkin ales comes from Uinta Brewing. Oaked Jacked Imperial Pumpkin Ale is a big pumpkin ale aged in Bourbon barrels. The barrel complements the base beer perfectly adding rich vanilla/whiskey notes that are rich and inviting.

You can imagine my joy when I heard that Uinta was brewing a sister beer to compliment Oaked Jacked's rich character. Jacked B Nimble is an Imperial Black Pumpkin Ale that is also aged in Bourbon barrels and brewed with roasted malt and rye. The addition of the darker malts and rye will likely add some body and a spiced "snap" from the rye. This will come in the Uinta's Crooked Line signature 750ml cork and caged bottle and will dial in at 11.0% ABV. Nearly a full percent bigger than Oaked Jacked.

This should be popping up in a few weeks and will likely only be available the brewery, not at DABC stores. Of course we'll announce the official release.

I'm envisioning something equivalent to a blend of Labyrinth and Jacked. Mmm.

Really looking forward to this beer. I have found all Utah pumpkin beers to be very enjoyable. Was looking to trying my own pumpkin ale this fall but my pumpkins didn't take. But that's okay because there are plenty of outstanding pumpkin ales offered in Utah.