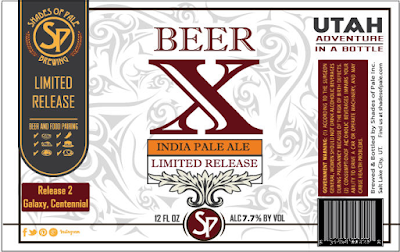 There's a new brew coming soon from Shades of Pale's Beer X Series. IPA Release 2 is an 7.7% IPA that uses Galaxy and Centennial hops.  This will be packaged in a 12oz bottle and will be available at the brewery in a few weeks.

Also available today is a special release from Epic. Son of a Baptist is an experimental 8.5% Imperial Stout that takes it's cues from Epic's Big Bad Baptist. This version is infused with coffee and cacao nibs but is not barrel aged. It's a limited - growler only release that is only around 'til it's gone. So don't procrastinate.