The Death of Utah's 3.2 Beer May Be Near 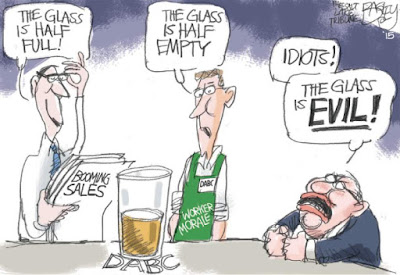 Utah and Oklahoma share a lot of history concerning alcohol and the way it's governed. For many years our liquor laws were virtually identical in application and enforcement. Recently Oklahoma has began stepping away from Utah's more sharia-esque approach to alcohol giving way to laws that now allow "high point" beers on draft in bars and restaurants.

Recently Oklahoma has been creating a buzz in the beer industry as Oklahoma's legislature is in favor of new legislation that would do away with their states 3.2 beer laws. Currently, Oklahoma, Kansas, Colorado, Utah and Minnesota still have 3.2 beer laws on the books with Oklahoma consuming most of the 3.2 beer produced. If this Oklahoma law were to pass next year, it could change the dynamics of how the big breweries make and market their 3.2 suds.

With a huge segment of their market disappearing, there is a real possibility that the mega breweries might have a change of heart in producing “small batches” of 3.2 beer just for the three remaining states that rely heavily on them. That would mean they would have to change their laws or go without.

In the case of Utah, it's anybody's guess on what would happen if there was no more 3.2 beer to be sold. In my opinion, our Mormon lead legislature would not suddenly open the flood gates and let all of the high point beer flow into grocery, convenience stores and bar taps. It is more likely that they will raise the 3.2% ABW cap to 5% to 5.5% ABV ceiling,  then take away a current drinking liberty that we now enjoy. This would open up some options for out of state draft beers to enter the market and allow some locally made higher alcohol beers onto tap handles as well. But these are all theories that exist in my tiny mind.

It could be an interesting turn of events that could reshape Utah's alcohol landscape much sooner than people (my self included) had originally envisioned. We'll keep an eye on what develops on Oklahoma and pass on relevant updates.


Here are a few article from Oklahoma one the proposed laws
http://www.tulsaworld.com/blogs/scene/whattheale/what-the-ale-could-oklahoma-change-the-rest-of-the/article_23ed3f43-fd3d-5f8f-815d-90d53c6d3868.html

What are your thoughts, is this game changing or just a flash in the pan? Please share.

Hooray! Thanks for keeping us informed Mike.

even money says the shitbags running this state would have us do without!

I'm wondering what the local craft breweries, who make some fine 3.2% abw brews, will think of this.

Utah confuses me. I know I can get Epic Hopulent in VA and it's about 8%. So how is it Utah still has a 3.2 beer law? They can't possibly be making that, running it under the noses of residents and sending it all to my local grocery store. That would just be mean because that's a beautiful beer.

@ Carmen. To clarify: Utah beer isn't exclusively 3.2 - there is no limit to how strong a beer can be in Utah. The issues have to do with how and where it can be purchased. Any beer over 3.2 has to be purchased at a state run liquor store, it can't be refrigerated and it can't be poured on draft. That's where the issues lay.

Colorado has a referendum in 2016 to do away with 3.2 as well also Kansas. This is according to the distributors I've spoken with. Utah may be the only hold out after 2016. I think the likely hood of people getting rid of 3.2 beer laws in those states is high. Very few people care about alcohol content in beer out side of Utah, those other states have readily available access to high point already. The 3.2 beer laws are a basically a formality that don't do much to curb drinking.

I have two big wishes. First, do away with the 3.2 limitation on draft. I’ve heard rumors that a good portion of Utah-based breweries don’t want this restriction lifted because they’re afraid they’re going to lose tap handles to out-of-state breweries. I get that argument, but I think it’s a bit short-sighted and pessimistic. Sure there is a risk of losing some handles, but it also opens the door to getting the rest of their portfolios on tap. How awesome would it be to be able to walk into your local watering hole and get a super fresh Hop Nosh on tap? A quality beer bar that currently has ten or twelve taps isn’t going to stick with that many taps if this restriction is lifted…they’re going to add a boatload of taps! Places like The Bayou, Beer Bar, Beer Hive, etc. are going to end up with a wall of taps. I still remember the first time I walked into Falling Rock in Denver and saw all those beautiful taps lined up behind the bar…I was speechless Bottom line, if you make a good beer, I have no doubt that there will be plenty of room alongside out-of-state offerings. Another reason I want the 3.2 on draft restriction lifted, it opens the door for more micro and nano breweries. It’s a lot easier and a lot cheaper for a brewery startup to package and serve from a keg than it is for them to set up a bottling or canning line right out of the gates.

Second, get the state out of the liquor store business. It limits choice, it negatively impacts the quality of the product, the people working there don’t care (because where else are you going to go)...it needs to end. Just privatize the whole thing and allow me to buy any beer I want from a cold case. Let the state continue to collect taxes on alcohol sales, but get rid of the warehouses that store my beer at 100+F before I have a chance to buy it.

I think that local breweries shouldn't be scared about losing draft handles. In theory a lot of people would still go for the local beer first because it will be the freshest. Out-of-state beer still has to make a longer journey to our local pubs. The local brews can be freshly finished and delivered within an hour or less.
Let's hope some change can really happen. This is huge news and I hope it's not just wishful thinking.

Thanks for sharing this Mikey! I appreciate the news you provide for us beer lovers here.

My thoughts on this pretty much line up with Rob. The Bayou and other businesses would be able to open up more effort in offering draft beer. Increased competition is a fantastic motivator for all parties involved. When the local breweries would suddenly need to compete with out of state labels, it will force adaptation and hopefully increase quality all around.

Conduct this experiment: Compare a grocery store purchased Fat tire with a liquor store fat tire. Which one has more flavor? which one just tastes "wrong"?

I am just afraid, as you explained Mikey, that the DABC will stick their big nose in the middle of it all and remove some liberty that we currently have to make up the "lose" they will suffer when they have to abandon 3.2 beer? The question is what will that be? Go back towards the private club model?

I enjoyed reading the comments posted. I'm planning to open a craft brewery in SLC within the next two years. I hope Utah law makers by that point in time realize the discourtesy they bring to the state. When people move to Utah it doesn't necessarily mean that everyone will drink. Tourism ultimately helps serve their interests as well as create a stimulative enviornment for small business. Win-Win for all involved. There needs to be a separation between church and state. It's is the constitution folks....

I look forward to more desirable alcohol laws and being able to give back to the community in which I have come to love!