Is Cutthroat No More? 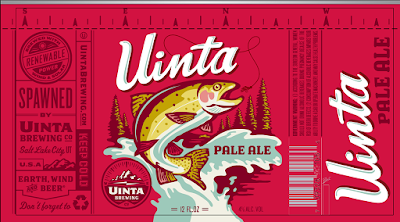 I came across this image the other day of the iconic Uinta Cutthroat label missing one important thing. It doesn't say, Cutthroat! This immediately sent me into panic mode. There has only been one other instances in the past decade that has sent Utah Beer Blog Headquarters (my basement) into Beer-Defcon 3 status - the other was Rooster's Höpfner pizza beer a few years back. After I managed to pull myself out of the fetal position, I manage to contact Uinta to express my outrage.

Lindsay Burke, Uinta's Marketing Director - managed somehow to talk me off the ledge. She informed me that there was no damn way that Uinta's flagship beer was loosing it's beloved name, only that Uinta is looking to spread the love of Cutthroat beyond Utah's boarders.

You see, many years ago, the name Cutthroat was caught in a bit of a tug-of war between Odell Brewing Co. and Uinta Brewing. Odell already owned the name Cutthroat Pale Ale even though Uinta had gone to market with their pale ale first. The breweries came to an agreement - Uinta could keep using the name, but only within Utah's boarders (even though Odell has long since discontinued their own Cutthroat pale ale).

That's how Uinta Pale Ale came to be - same beer, a slightly different label that all of America can now enjoy. Hissy-fit avoided!

Speaking of Odell, it is rumored that they will be entering the Utah market sometime in 2016 - I'm thinking their Cutthroat Porter will not be crossing the Utah/Colorado boarder.

Lots of bickering breweries these days could learn from what Uinta and Odell managed to do long ago.

Will the out of state version be a higher ABV?

The label above shows it being 4% ABV. It's likely the same ol' Cutthroat.

Beer is that the world's most generally consumed beverage, and also the most fashionable drink overall. It's thought by some to be the oldest soured drinkable. beer is sold-out in bottles and cans and in pubs and bars is on the market on draught.
If you want to buy Beer, go to this link and order now: Buy Beer