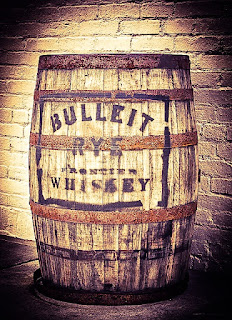 The info given on the whiskey barrel for the following beer is  wrong. It's my fault for not double checking my source. My apologies. Buffalo Trace is the maker of the whiskey and barrel.

Bfeen to Bar X lately? If you have you may have noticed that they love whiskey - Bourbons in particular. Bar X's owners love Bourbons so much that they often travel to various noted distilleries around the country selecting specific barrels that they can call their own.

Last year Bar X/Beer Bar co-owners  Duncan Burell and Richard Noel traveled to the Four Roses Distillery in Lawrenceburg, Kentucky where they make Bulleit Bourbon. There, the two sampled multiple barrels of the high rye content whiskey until they found some that "spoke to them". The distillery customized labels for Bar X packaged the bottles and sent the whiskey and the spent barrels to Salt Lake City. Those barrel are the heart of this story.

Spent Bourbon barrels are a hot commodity right now. A decade ago their best use was to become garden planters or artsy-fartsy coffee tables. Today they fetch top dollar so that breweries can age their barleywines, stouts or "whatever" in them. Rich and Duncan - who are also huge beer fans, did the math and searched out a local brewery to fill their empty barrels. Epic Brewing Co. was their final choice.

A local version of Epic's famed Big Bad Baptist was chosen to fill the Bulleit Barrels. Made with coffee from SLC's Blue Copper Coffee, the barrels created a special 1-off batch of Big Bad Baptist that will be exclusive to Beer Bar. Now comes the fun part.

This evening, Beer Bar will be having a release party from 6:00 - 8:00pm. Epic and Blue Copper will be there to talk about and answer any questions about the coffee/beer and there will be free samples of Blue Copper's cold brew that was used in the beer. Beer Bar will be selling 6 and 8oz. pours of the Baptist along with samples of the exclusive Bar-X Bulleit Bourbon.


Coffee, Bourbon and Beer? I think this will be a good day.