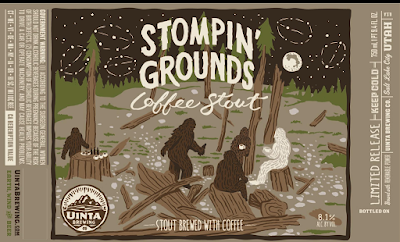 Uinta is officially out of control! The state's largest brewery just keeps-on-keep'n-on with new brews being added to their portfolio. I think this makes this one the seventh or eighth new release from Uinta since August.

This latest beer will be part of Uinta's Crooked Line of beers. It's a coffee stout that will be made with Salt Lake City's Publik Coffee Roasters. The beer looks to be a Foreign/Export stout at it's base and will dial in at 8.1% ABV. Foreign/Export Stouts are typically found in the tropical regions of the world and have higher alcohol with a very pronounced roasted character. I had a chance to to sample one of the experimental blends last week. It will likely be coffee forward, but the coffee won't encompass the entire beer.

As the beer's coffee blend is still be formulated, it's probable still a few weeks away from being released. As soon as it's release draws near we'll tell where and when.

Crooked Line dominates my beer fridge and will continue to do so!

Wonderful article! We are linking to this great post on our site.Keep up the good writing. Visit: Best Ground Coffee