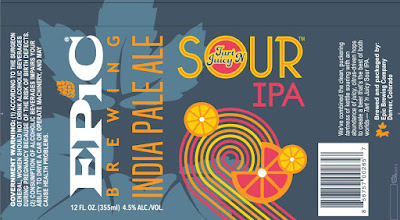 Epic's Sour IPA has proven to be a big hit. I have to admit I was skeptical that a hybrid Sour/IPA would find an audience in Utah but it's gone from a seasonal draft to a full time Production beer in record time.

Now Epic is expanding on top of that success by creating Tart 'n Juicy Sour IPA. It's similar to the Utah Session Sour IPA in that it's a kettle soured beer, but Tart n Juicy has a slightly different hop bill with an ABV of 4.5%. T&J will be produced in SLC and Denver and be packaged in 22oz. bottles and 12oz. cans. Utahans will get the bombers while the rest of the nation gets the cans.

Look for Tart n Juicy in Utah sometime this Spring.

Speaking of sour beers, Uinta Brewing is releasing Flamingose tomorrow (1/29/16). Flamingose is a tart and salty German style Gose beer made with pineapple and pays tribute to Utah's own "Pink Floyd" the Flamingo. If your not familiar with Floyd, he was Chilean Flamingo that freed himself from his home at SLC's Tracey Aviary in 1990. Floyd took up residence at the Great Salt Lake immediately and somehow thrived. He's called the briny lake home ever since. Floyd's current whereabouts are unknown.

A new beer and a story, what more do you need?

Labels courtesy: Shipcompliant.com
Posted by Mikey at 4:50 AM

They both sound lovely.

A little too salty for my taste but not bad.