Uinta Brewing Company announced today that Kevin Ely is resigning from his role as Brewmaster to pursue life on his family’s Appalachian farm in Eastern Ohio.

“Brewing at Uinta has been a tremendous opportunity,” says Ely. “My nine years here have been filled with great experiences and learning, and my time as a member of the Uinta family has been fantastic.  I look forward to tasting the upcoming innovative new beers and appreciating the future successes of the Uinta team.” 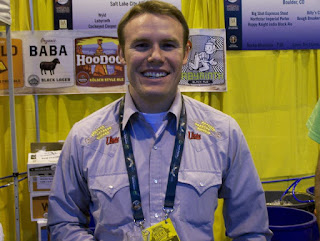 “We fully support Kevin’s decision to begin a new chapter in Ohio,” says Steve Mills, CEO. “Kevin will always be a part of the Uinta clan, but taking this step was important to him and his family.  We discussed the timing of his decision, and Kevin felt it was right due to our fantastic brewing leadership and talent at Uinta. I agree with his assessment. It’s worth noting our Founder and original Brewmaster, Will Hamill, has been heavily involved with brewing operations since Uinta’s inception and will remain so moving forward. We will miss Kevin, but Uinta is in a great position to live our purpose—to responsibly craft beers that inspire today’s and tomorrow’s beer drinkers.”

Uinta Brewing Company is located in Salt Lake City, Utah and is a Top-50 craft brewery in the U.S. by volume, selling over 80,000 barrels of beer last year.  An extensive search to find Uinta’s next Brewmaster is currently underway.

Best of Luck, Kevin! Your knowledge and dedication has really help raised the bar, not only in Utah but around the world. You will be missed.

Thank you very much Mikey! I really don't know what to say, other than thanks to everyone in the brewing community. Kevin

That's quite a poker face behind that beard! We were talking on Friday and I had no idea. Best of luck on the new adventure! I hope there is s good send off in order.

I will definitely miss judging the beeehive brewoff with Kevin, got the opportunity to sit next to him a few times and really learned a lot. Good Luck in Ohio

The power of K in Utah just fell by an exponent, no more K cubed. Best of Luck Kevin!