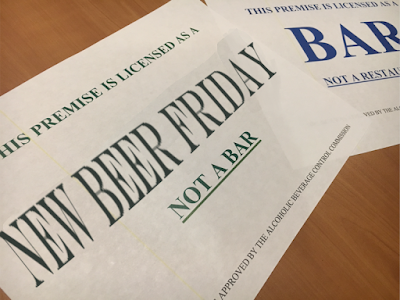 As we bid farewell to this soggy April, our hearts turn to... ah screw it. It's F'n Friday! None of you want to hear me wax poetic. So, let's just get to the new suds on the list. And just to be clear, New Beer Friday is NOT a bar... but it probably should be.

Golden Road's Tart Mango Cart - I've not tried this yet. It's described as being mostly mango and being slightly tart. 3.2% ABV - not ABW. @ Smith's, Harmon's

Desert Edge's - Belgian Enkel - Enkel, meaning "single" was used by Trappist breweries to label their lower ABV beers. These beers, also known as Patersbier or "father's beer", are Belgian session beers originally brewed for the monks themselves. This is a unfiltered golden ale with fruity banana and pear flavors from the yeast. Light bready malt flavor. Low bitterness and a Dry finish.

2 Row's Feeling Hazy N.E. Style Double IPA -This new beer from 2 Row is a tropical fruit salad. made with Mosaic and El Dorado Hops, it's huge with mango, pineapple grapefruit, tangerine and berry flavors with little bitterness. It's more murky than hazy, but that just adds to the perceived juiciness. It comes in at 9.0% ABV - which can be a problem. since it's hardly detectable. You need this! @ 2 Row, Bayou, Beerhive, Beer Bar, Slackwater

Fisher's Citra Bomb Tom -Missed out on this one yesterday, It's described as being a citra hopped pale ale. If you've had it please share your thoughts.

Tune in for more New Beer Friday as we discuss these and other beer related topics with Mick and Allen this afternoon at 3:30pm on KBER101.

I also saw the first Uinta 801 Dry Hopped Pilsner on Wednesday, the one with Citra and Galaxy. It was tropical and some candy as the hop flavors were string but didn't make it much more bitter. I rather enjoyed it.